Eddie getting techy on the Arkansas. 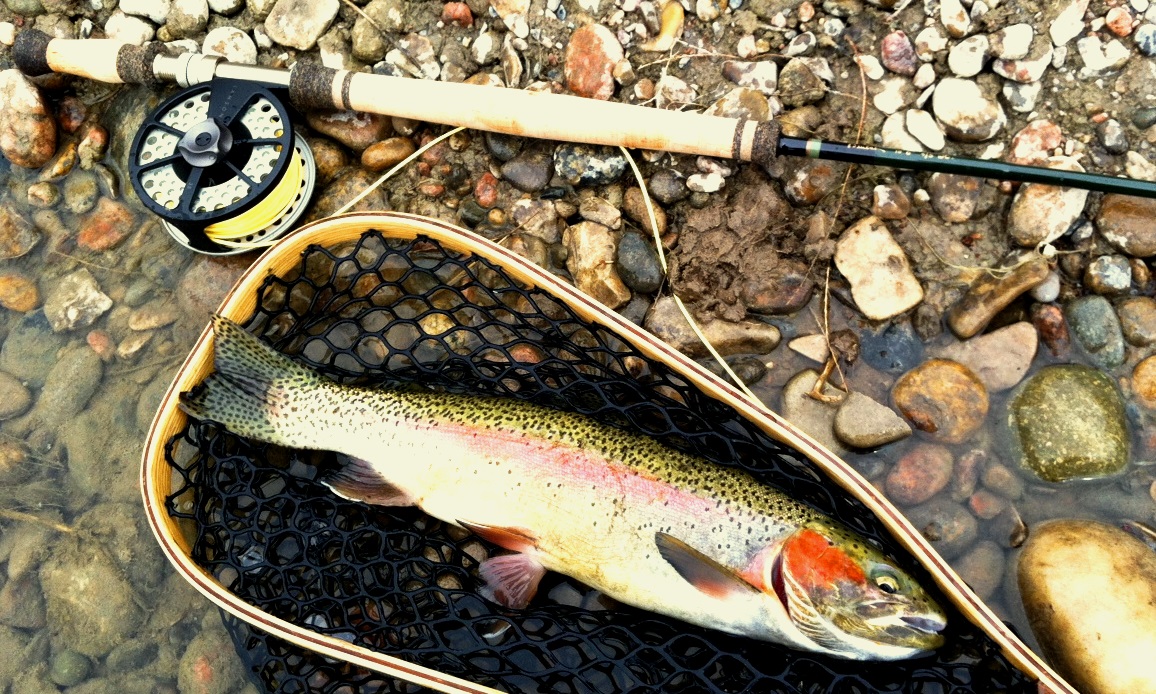 So I’d been perched here on the roof of Idaho all winter, skiing and swinging up a few cold-water rainbows and biding my time for a trip south by westwards for some winter steelhead.  My work schedule, I’ll admit, had my style in a cramp for most of the winter…scarcely an original complaint, but when it opened up at the same time the clouds did on coastal Oregon, I took the hint and made a run for it.  At the far end of a long drive, I found river after river running high and colored.  Perfect. 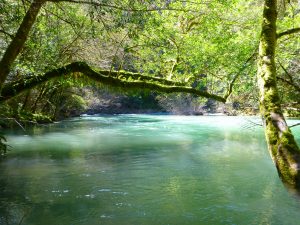 I’d swim all the way up from the Pacific just to spawn here, too.

Or at least, perfect in theory.  Clear skies and sunshine made the mid-day fishing feel a little shaky, but the mid-day napping was outstanding.   I hit a succession of rivers while each dropped and cleared, and after a few days, found this bright little hen on a bright afternoon.  She fought as hard as any steelhead I’ve ever hooked, and sent me back to Idaho feeling pretty satisfied.  Thanks, James, for the drift boat ride and photos, and Asa for being a ninja with the net. 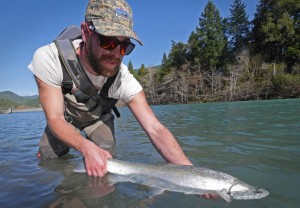 Doesn’t get much better than this.

I returned home to, ironically, a dropping, clearing river with big native rainbows trickling in.   Most days I’ve found a fish or two willing to eat a swung fly, which is more than enough to maintain my interest.  They’ll be getting their freak on in a month or so, but for now the spawning gravel is empty and the runs and buckets are occupied.  This one was the gem of this week’s float trip, brought to hand by the 12’6” Platinum 6-weight in the last light of sunset.  In the coming weeks, as days get longer and water temperatures climb, I’m hoping for plenty more of the same. 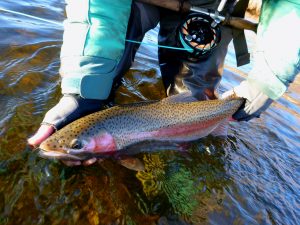 The bulk of my swing-style trout patterns are 3 to 4-inches long. Recently, I’ve had pretty good luck swinging smaller bugs, particularly when colder water makes fish less willing to chase streamers. The nice thing about these light, 1.5-inch long flies is their versatility: you can dredge them with a skagit and 12′ of T-11 or twitch them across the flats with a scandi and clear intermediate polyleader. 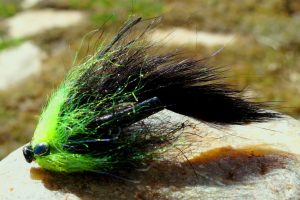 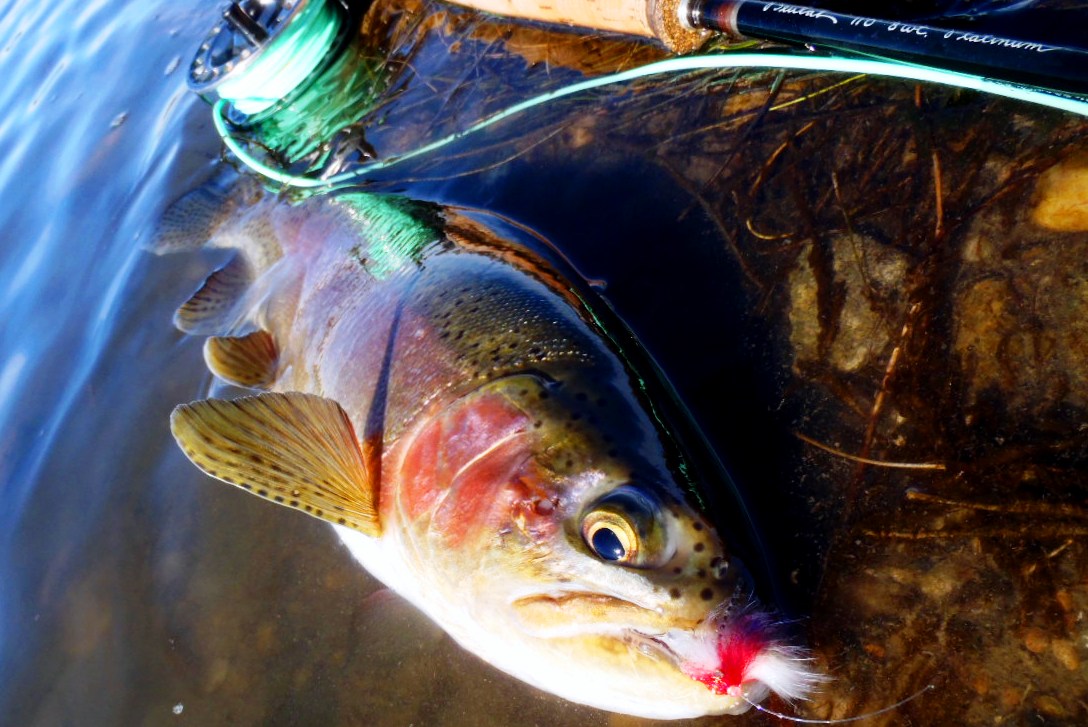 Something I see people do consistently while steelhead fishing is forget to fish the short cast. A lot of the time while guiding, I see people step into a run and immediately start peeling all sorts of line off their reel before they make the first cast. Usually their first cast is at least the length of shooting head plus the sink tip or leader they are using. That means the fly is fishing at least 30 to 40 feet out from the angler on the first cast, leaving the water closer in completely un-fished! Just because your fishing a spey rod doesn’t mean you have to instantly start launching casts out into the middle of the river. I know the urge to bomb it out there is strong, but don’t forget about the water right out in front of you. 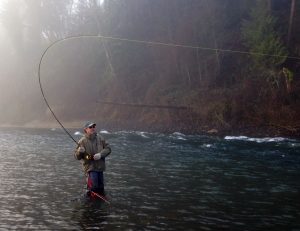 Erik hooked into his first ever spey rod steelie on a cast of about half the skagit head he was using.

This winter I’ve seen several steelhead caught with no more than half the skagit head out of the rod tip, and 2 fish caught on the very first cast of just the sink tip! Sometimes this is the only fish of the day. If we hadn’t started short, we would have never found these fish. Which can be the difference between success and a skunking. 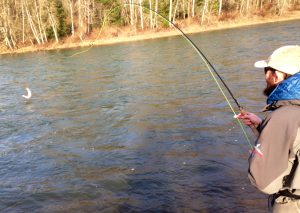 Alex got this cartwheeler on his first sink tip length cast!

When steelheading it’s important to remember that the fish can be just about anywhere. Sure, each run has it’s sweet spots or “buckets”, but steelhead (especially winter) are on the move. Obviously there are times of resting or holding, as well as times when they are more likely to be moving around than others. But, in general they are on an upstream migration until they reach they’re spawning grounds. I’ve heard a couple legendary steelhead guides say things like, “they are where you find ’em”. To me this means that where one fish decides to stop and hold isn’t necessarily where the next fish will hold in that same run. So next time you head out to the river and step into your first spot, remember to fish all the water in the run you can. This starts by not forgetting to fish the short cast, you never know where you might find your fish! 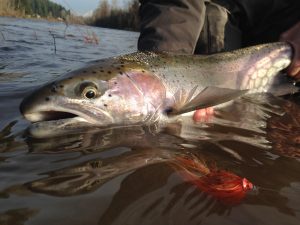 Water temps are still pretty low, but the swing bite through Town is starting to heat up. 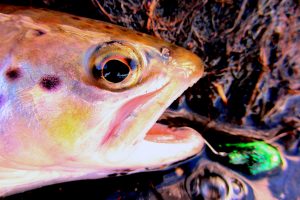 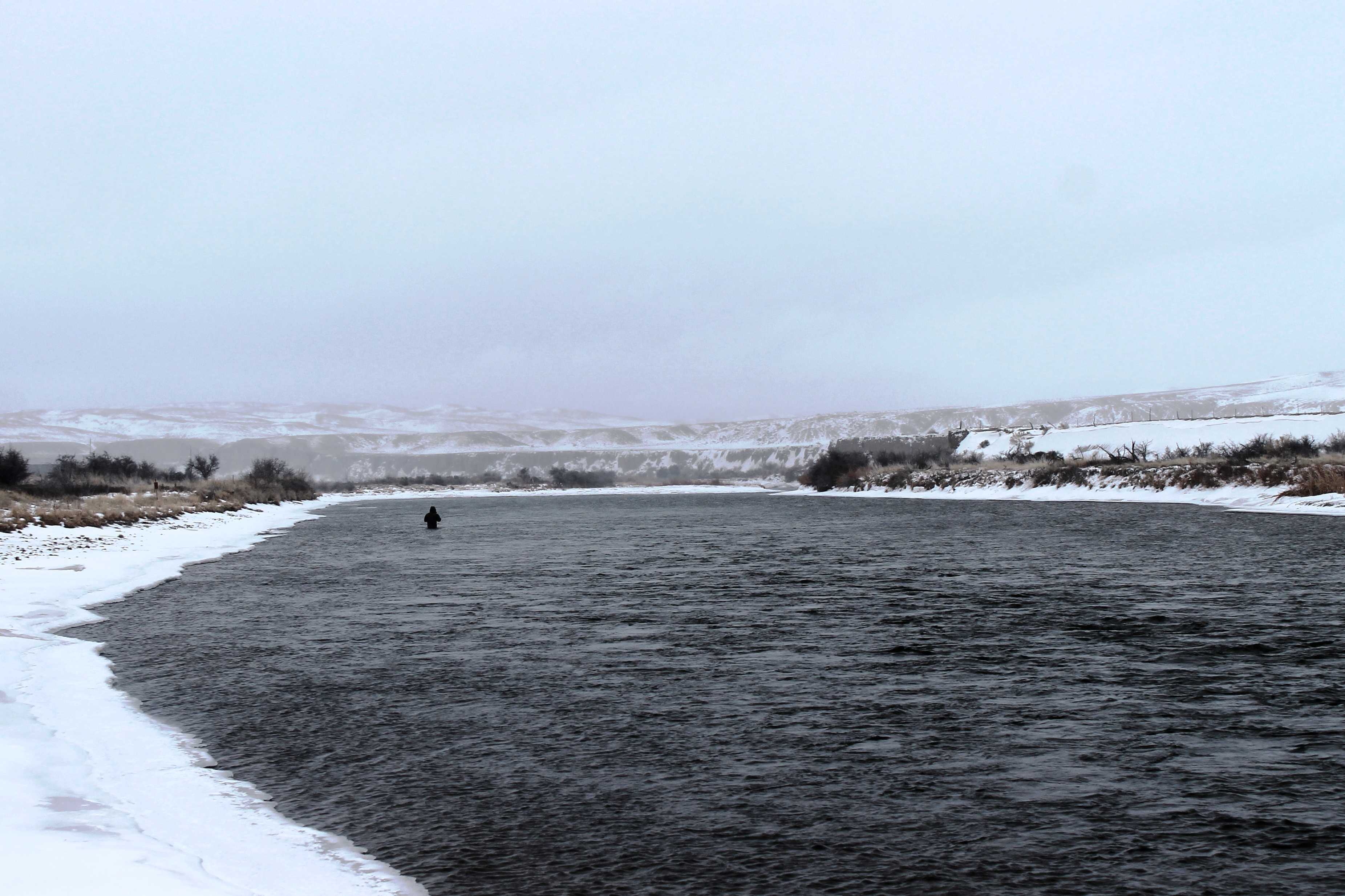 Swinging for trout in the dead of winter is an exercise in misery. The days are short, the weather is lousy, and the fish are lethargic. You’d be better off staying home. 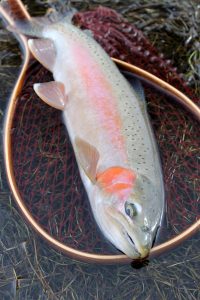 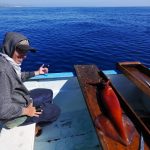 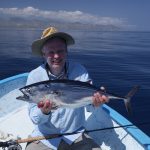 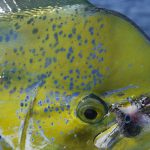 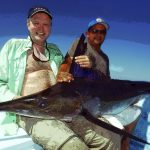 October can be an and was an outstanding month for flyfishing in Baja. Warm water and plentiful bait brought marlin, dorado , skipjack and a few tuna into the area. Large schools of Humboldt squid swam at @ 500-1000 ft and had pelagic species whipped into a frenzy. We landed dorado in the 10-30lb range, huge skipjack and Marlin @125lbs. The action kept us busy all day without ever having to go more than 10 miles from home.

Cape Guides and The Beulah Fly Rods crew took a recent run out to the “Elbow”.  Sun was shining and the wind was down and we had our selves a good day.  Even got to play with some of the local hard shells.  The small stuff continues to be the fly of choice with Sandeels being the favorite.  The fish in the system are not the cows we had earlier in the season but strong numbers of little guys kept us busy.  With water temps pretty high and the End of August coming quickly the time is now to prepare for the fall madness.  When you are ready to get out on the water Contact Us and book today.

It is turning out to be one of the best and most consistent years for roosterfish in recent history. Fair and consistent weather and a slow but steady climb in water temperatures have all contributed to happy fish. The good supplies of sardines haven’t hurt either. What a contrast to last year.

A group of incredibly fun and friendly Ukraine and Russian fisherman and family braved the 32 hr journey to experience Baja and chase roosterfish. We fished 6 days and had boats landing multiple roosterfish daily. Roosterfish ranged from 15 -40lbs, most in the 20-30lb range, with boats taking 2-6 fish a day. One of the guests set out to catch a variety of species and landed 9 before he was done. We could have had a few more but the fishing was concentrated in areas where roosterfish roam.

There was a little pressure coming from the south but nothing that couldn’t be avoided. Apparently the bait and fishing in Los Barilles  is scant and boats are coming up the coast to fish for a few hour. This has put down the fish at times with the drone of motors and sometimes to close for comfort technique.  The Captains see our sardines flying and roosters  crashing and can’t resist crashing the party. Around here, a traffic jam is anything over 4 boats and we managed to find our own water by being first and last on the scene. This tactic actually enhanced the fishing with late afternoon action being the best. Whether due to the afternoon high tide,    or letting the water settle, we found more fish late.

There are plenty of skipjack and jack crevalles , to keep a change of pace and even a pompano or two, but roosterfish are still the fish du jour. Dorado and sails are starting to show offshore, stay tuned for next week when we head out a little deeper.

Another great week for roosterfish. weather conditions were generally calm except for a couple afternoons with variable winds, but nothing to get in the way of the catching. All our boats landed and released 2-6 roosterfish per day in the 20-40 lb range. We had a large sierra bite off after exploding on a fly and a couple random species adding to the excitement. The sardines have been plentiful and of good size. Although traffic has been busy, with boats coming up from Los Barilles for sardines, the roosters have been in enough places that you can find your own water. As conditions continue to heat up we expect to see some dorado in the next couple weeks.