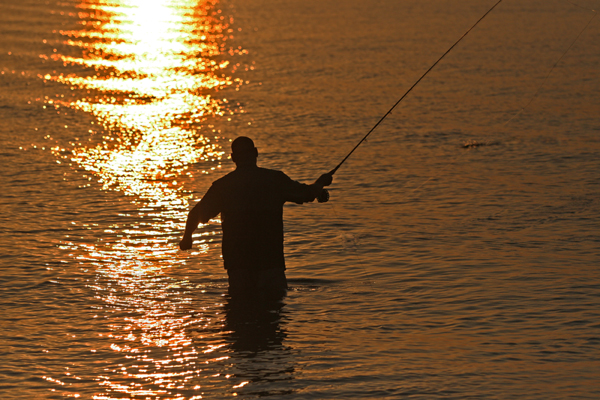 Day 2 brought a mixed bag of rollers, wind, clouds, and boats (lots of them).  Our friend from the North West worked on his sea legs and his Barrilata lifting skills.  They were hungry and in good numbers.  We did get ourselves a really nice 10 pounder.  Made a run to the Point and had some good shots at solid 40 pound rooster. No love from Pesca Gallo today.  From there we moved around looking for some more action and found ourselves in a mix of boats.  More than we are used to, but there is a lot of room to roam. By afternoon the clouds and wind kicked up and it was siesta time.  One of the many perks of Mexico is the availability of Avocadoes and fresh chiles.  Nothing beats a big bowl of Guacamole freshly made.  Another day on the water only make s tomorrow more exciting

First day in paradise.  Turns out its a lot like riding a bike.  You remember just what to do when you need to do it.  The water wasn’t perfect we did have some wind  but otherwise the weather was perfect and the fish were ready to play.  We had a great morning with shots at Dorado, Pargo, and Gallos all very close to shore.  The flies were right and we made it work.  We put our Beulah Blue Waters to the test and they Aced it.  We did see some traffic on the water but it didn’t stop our pursuit. The island is holding Sardinas which is in contrast to what we had last year at this time.  We received our third part of our trifecta later in the afternoon and went out to do some more scouting.  The Sea of Cortez is alive.  Tomorrow will be exciting and we look forward to getting our friend from the North West his first Rooster

Here is a view from our “Happy Place” on our way to our “Better Happy Place”.

It’s the beginning of the season and we here at Fly Fish Mex are really excited to get on the water.  The bags are packed, rods are ready, reels spooled and tested, and we will be on the water Thursday the 2nd.  The fishing reports have been all over the place as is the norm for this part of the year on the East Cape and we have had reports of everything from Roosters, Wahoo, and Dorado.  Keep tuned in to our site for updated reports along with photos of the catch. 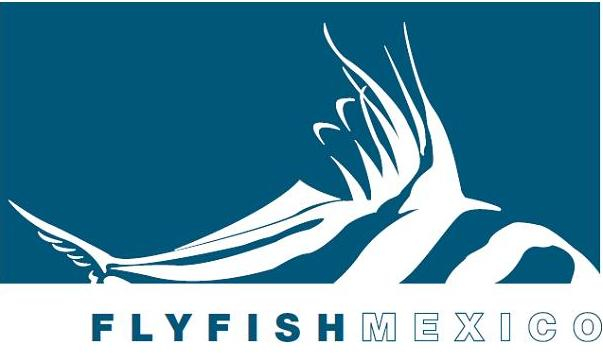 Forty five minutes southeast of La Paz is one of the most productive blue water fly fishing areas in the world. Gentle seas, fair weather and a precipitous drop of the ocean floor make this the perfect setting for fly fishing. Add the incredible number of migrating pelagic and resident species and you have a recipe for great fly fishing.

Fishing can be excellent year round but the best action and conditions for fly fishing comes in May, June and July. Fair but hot weather settles into the area and an abundance of bait attracts migrating species like roosterfish, jacks, dorado, billfish, tuna and wahoo. During the summer months all these and more species can be anticipated, but if you have a specific quarry there are certain weeks when your chances are better. 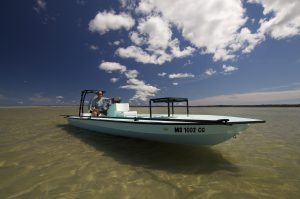 Cape Guides is a Fly Fishing Guide Service created by Capt. Jeff Iadonisi out of a passion for the fish that swim in his local waters.  Jeff, a cape cod native
has always been drawn to the ocean and would like to share some of favorite fishing experiences with you.

North Side of Cape Cod

Cape Cod Bay – Pristine white sand flats that will make you wonder if you are in the Bahamas.

On the South side of the Cape

In the spring large migration of Blue Fish come into Vineyard Sound.  They are an amazingly aggressive and strong fishing fish. Casting topwater sliders or poppers to cruising Blues is a thrilling experience.
In the Fall you can punish your drag, with the fast fish of the North East, False Albacore and Atlantic Bonito.  Hardtails are a thrilling experience that will leave you questioning if you have enough backing.

Whether you are a novice or avid angler I can work with you to create a lifetime of memories.

Bring up the topic of fly-fishing for striped bass in the surf and East Coast hotspots like Montauk and Cape Cod are usually first to pop into fishermen’s heads. Many don’t even realize that the Pacific-facing beaches of California see large enough runs of migrating stripers every summer to constitute a viable fly-rod fishery thanks to a mere 163 specimens that were transplanted from New Jersey to San Francisco Bay back in 1879.

Though tactics can be very similar to those used on the east coast, the numbers of fish present along the California coast do not come close to those on the other side of the country. Over there, it is not unrealistic during a great day to land a double-digit number of fish. Out here, however, landing a single fish in the double-digit pound category is the mark of a great day. As a result, fly-fishing for west coast stripers in the surf is in some ways more akin to the pursuit of west coast steelhead than east coast bass, as they are a “fish of a thousand casts”. 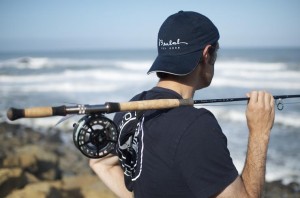 Skunkings are a regular occurrence. To connect to one of these fish a number of factors have to come together: winds need to be light, swells need to be low, fishy structure needs to be located, and then the angler needs to be on his or her game during this fleeting window. Before long, the tide will shift, the wind will come up, or both, and chances for success will drop dramatically. Because of the challenging nature of pursuing these fish in the surf, I consider a session successful if my clients or I are able to effectively present flies in a “fishy zone” that I have real confidence in during ideal conditions. This is really all that can be asked for as a guide and angler pursuing CA surf stripers. That heart-stopping violent grab followed by strong runs and powerful head shakes is just the bonus that happens often enough to keep me coming back for more.

When hooking bass with any consistency in the Pacific suds is such a challenge, many might wonder why not just fish the California Delta or San Francisco Bay instead. 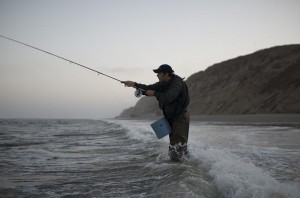 “…there are few dinks in the surf.” Loren Elliot

Though by no means easy, these fisheries offer a fly flinger much more forgiving windows of opportunity, as well as greater numbers of fish  (twenty fish days are possible). So then why do I return to the surf day after day during the summer months? The answer lies in the challenge and great potential for reward that, in my mind, cannot be equaled on the inland striper fisheries. An angler is completely immersed in the environment of the bass when fly fishing afoot in the surf. This environ is often rough, but this means that usually only adult bass roam this zone to feed, while the packs of “schoolies” stick to the protected inland waters. As a result, there are few dinks in the surf, and the opportunity to hook a fish over twenty pounds is very much present. 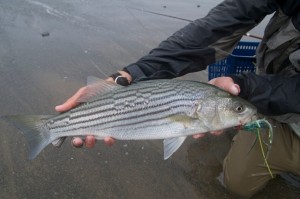 Surf stripers are truly turbo-charged. They are in the surf for one reason only: to feed. This makes them extremely aggressive, as a bass has little time to inspect an offering before the next wave sweeps it away. These fish do not mess around when taking a fly, and just about every grab is violent. Because stripers in the surf are well fed on baitfish and adapted to surviving in the crashing waves, they fight unlike inland stripers, often making an initial run well into the backing as they charge for deep water past the surf line. That first tug is all it takes to open one’s eyes to the absolute thrill of fly-fishing our west coast surf. 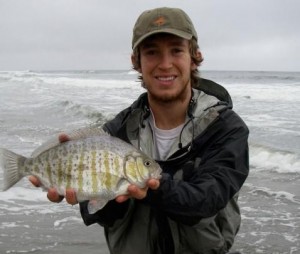