“NERVOUS WATER, 9:30, 45 FEET!!!!!” I’m standing at the bow on a beautiful section of flats with a grassy, dark bottom.   Low angle light has this flat lander struggling to see anything.  Then, Alejandro directs me off the poling tower and his hawk-eyed son, Tommy, frantically points to a spot in the distance.   All I can think is: what on EARTH are they pointing at?? So let’s backup a bit… 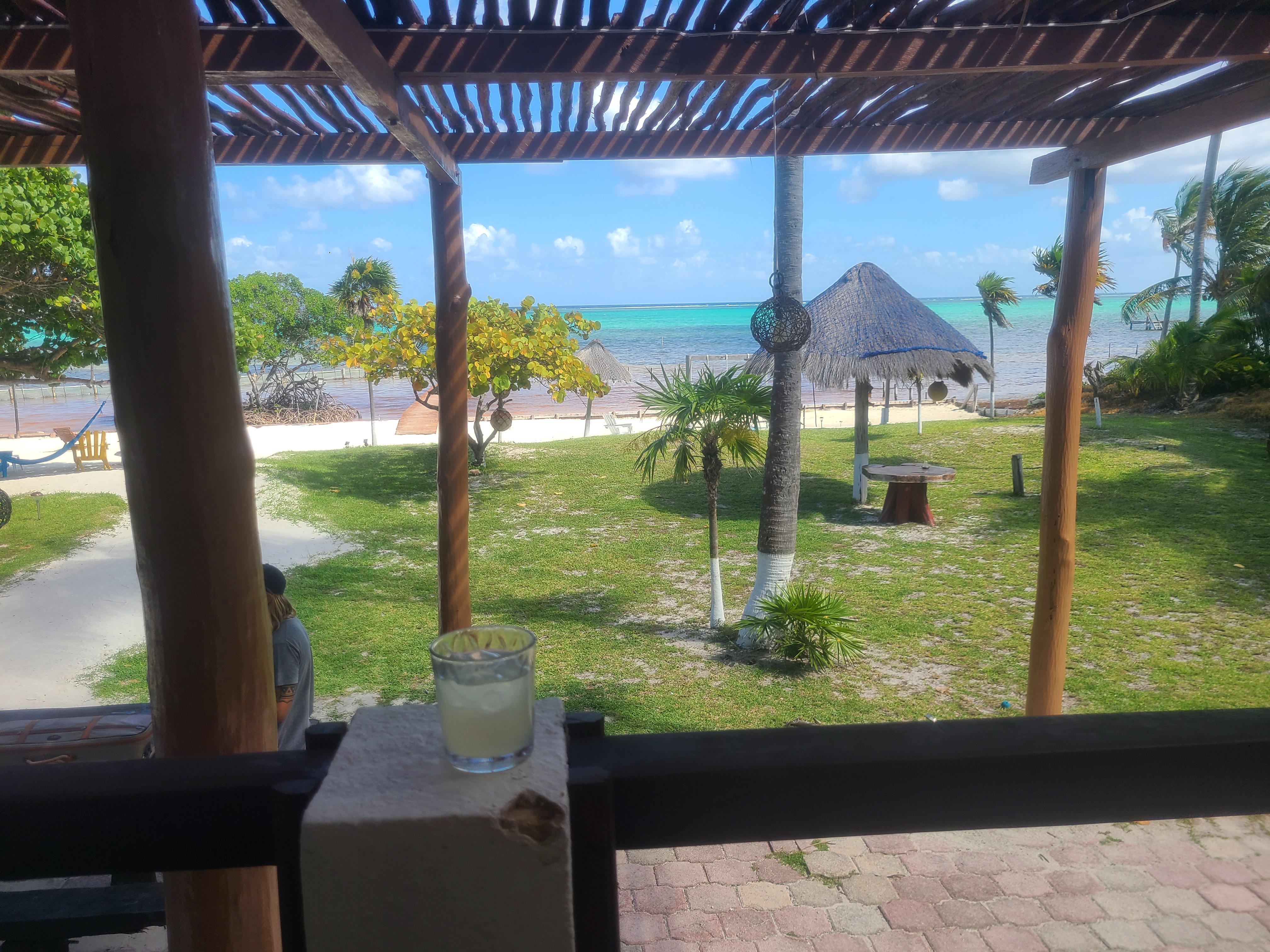 The shuttle ride South was a long 5 hours from Cancun to the sleepy fishing village of Xcalak. Levels of excitement were high, and our arrival to the legendary Xflats was accompanied by hooting and hollering with a few “road sodas” splashing around. Two dogs, Bambi and Joey, greet us first and the reality of 7 nights and 6 days in paradise slowly settles into all of us. The Xflats immediately feels like home, and in a sense, we are really staying at Jesse Colten’s pad: simple but comfortable accommodations, laidback atmosphere and a small staff who very quickly feel like family.  Margaritas are passed out and off we go to get the lay of the land. Jesse never walks out on the dock without a fly rod, and we immediately see activity and even a barracuda lurking on our first glimpse of the water. 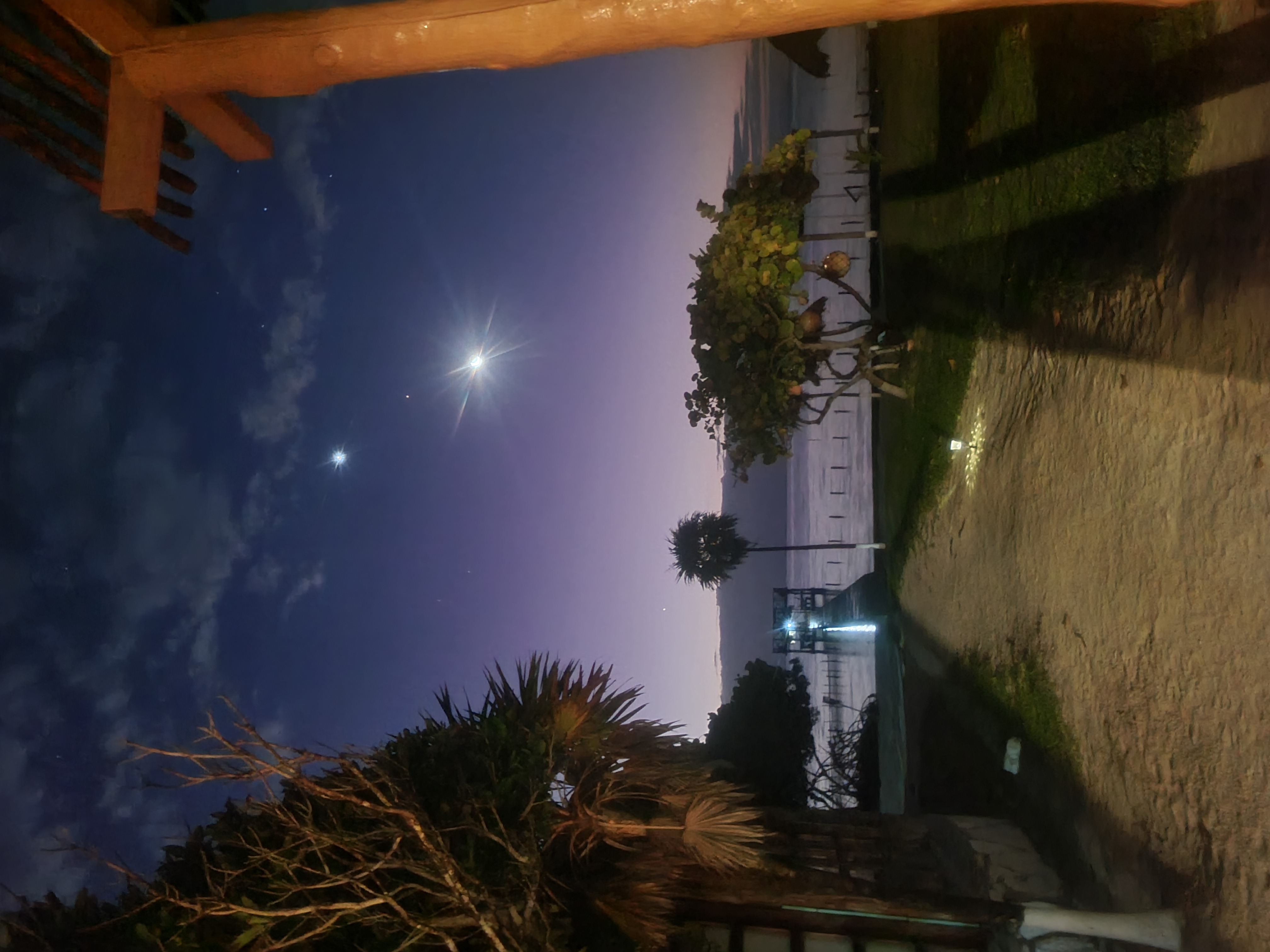 I spent time setting up for fishing that afternoon. I decided on 3 rods: 2 Opal 10 wt. single hand series with Scientific Anglers Amplitude Tropical Titan tapered floating line.  An 8 wt. Opal single with the Amplitude Infinity Salt tapered float line. My reasoning was as such: one 10 wt. would be dedicated to jacks and tarpon. I used a stretch of straight 40 lb. Seaguar fluorocarbon tippet to ensure maximum strength. I could really set hard and lay the hammer down on these powerful fish. Another 10 wt. had a 9 ft Scientific Anglers Absolute Fluorocarbon Saltwater Tapered 20 lb. leader to which I attached a 3-foot section of 16 lb. Scientific Angler Absolute tippet material. This was my Excalibur. This was my permit rod. In my mind, I wanted to have full advantage of a rod that could punch the wind. More on that later. And finally, for the bonefish peppered around the flats, the 8 wt. Opal with a Scientific Anglers Fluorocarbon 16 lb. SA tapered leader funneled down to a 12 lb. section of tippet was ideal.

So, before I go on, I need to tell all of you that I have never fished a tropical flat before. I learned most of my casting skills while striper fishing New England flats and shore casting.  My teachers were some of the most well-seasoned, salty Beulah boys on Cape Cod and off Martha’s Vineyard. For those of you who don’t know about striper fishing, it often involves blind casting into the full moon to nocturnal striper.  You have plenty of time to get pretty good at handling a 10 wt. Spent many summers with James Shaughnessy, the owner of Beulah, at his operation in Baja catching roosters and jacks in deeper waters. Calling Colorado my home waters, and trout fishing my way through the Rockies is how I honed my fly fishing skills. Hope that was an adequate disclaimer? 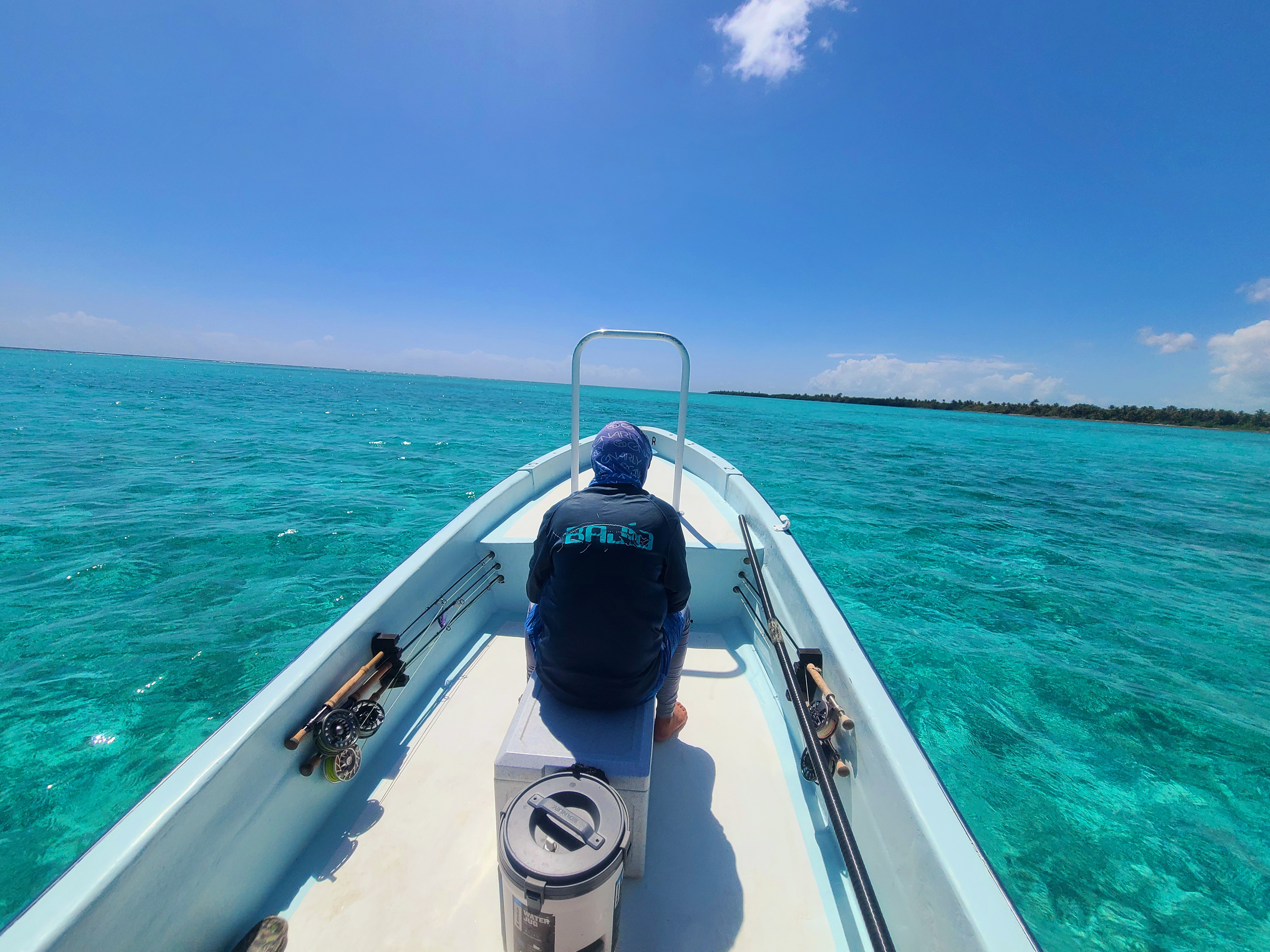 So here we go, day 1 of 3. I am just going to go ahead and admit, that these were what I referred to as “education days.” Cycled through 2 guides and their partners and really got a sense of what exactly they were looking for. “Nervous” water is not something that is easy to spot. When a pack of jacks or roosters arrive in Baja, it is explosive. Fins up, dark shadows. Can we use the word splashy?? Nervous water is subtle. As a fish (or pack of fish) cruises the flats, they displace water like a shark just cruising around for a easy meal. This displacement creates abnormalities on the surface, mainly in the form of subtle changes in the angles of the surface ripples. If you ever seen someone slowly wade into the flats, you can see that the surface ripples behind them change. Now try spotting these ripples across 180 degrees of water, changing angles of the sun, floating and submerged sargasso, the unbelievable camouflaged nature of your target species and the wind that always seems to be blowing in an inopportune angle. For the untrained eye (**cough** mine), you can imagine how useless I felt when I heard “nervous water” shouted, casting to a fish I couldn’t even lay eyes on.  Additionally relying on my split-second ability to visualize a clock and cast at whatever o’clock my guide is telling me to throw to.  And I also needed to know how to cast 30 feet and not 40 feet.  If a permit sees a fly line, you can be damn sure they’re swimming away.

Jesse Colten said it best to me after feeling slightly defeated the 3rd day: “This is not easy, but you will get your eyes adjusted. And a good attitude and faith that you will connect are what really matter.” 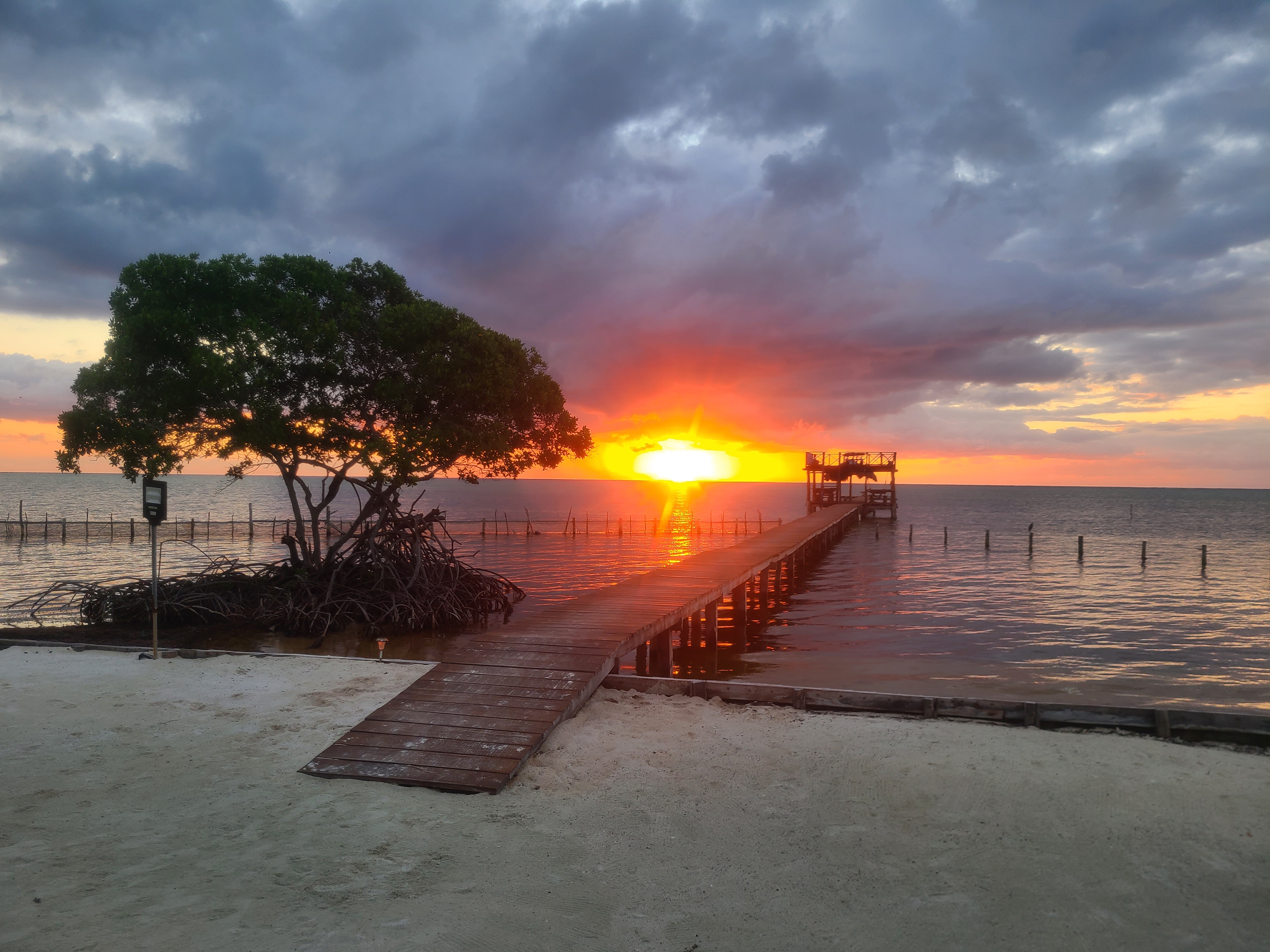 Day 4 starts with a beautiful sunrise and an amazing stalking experience to tailing permit with guide, Kissi, who maintains that the best way to get a permit to eat is on foot. They stay feeding and you get close enough to make the perfect shot count. Slowly approaching on foot, ducked down and quiet, the elusiveness of permit became much clearer as I present that tiny crab to a set of fish whose direction of feeding is only given away only by the positioning of their dorsal fins and tail above water. Let me be VERY clear: you can do everything right. These permit just vanish into the flats and refuse what seems to be a perfect presentation.  Shot after shot, time after time, the slow turn away or disappearance of these fickle creatures becomes customary.   Be it cruisers by the boat I can now suddenly spot or feeding fish, they just don’t want what I have to give. But somehow my vision is there, and now it feels like only a matter of time. 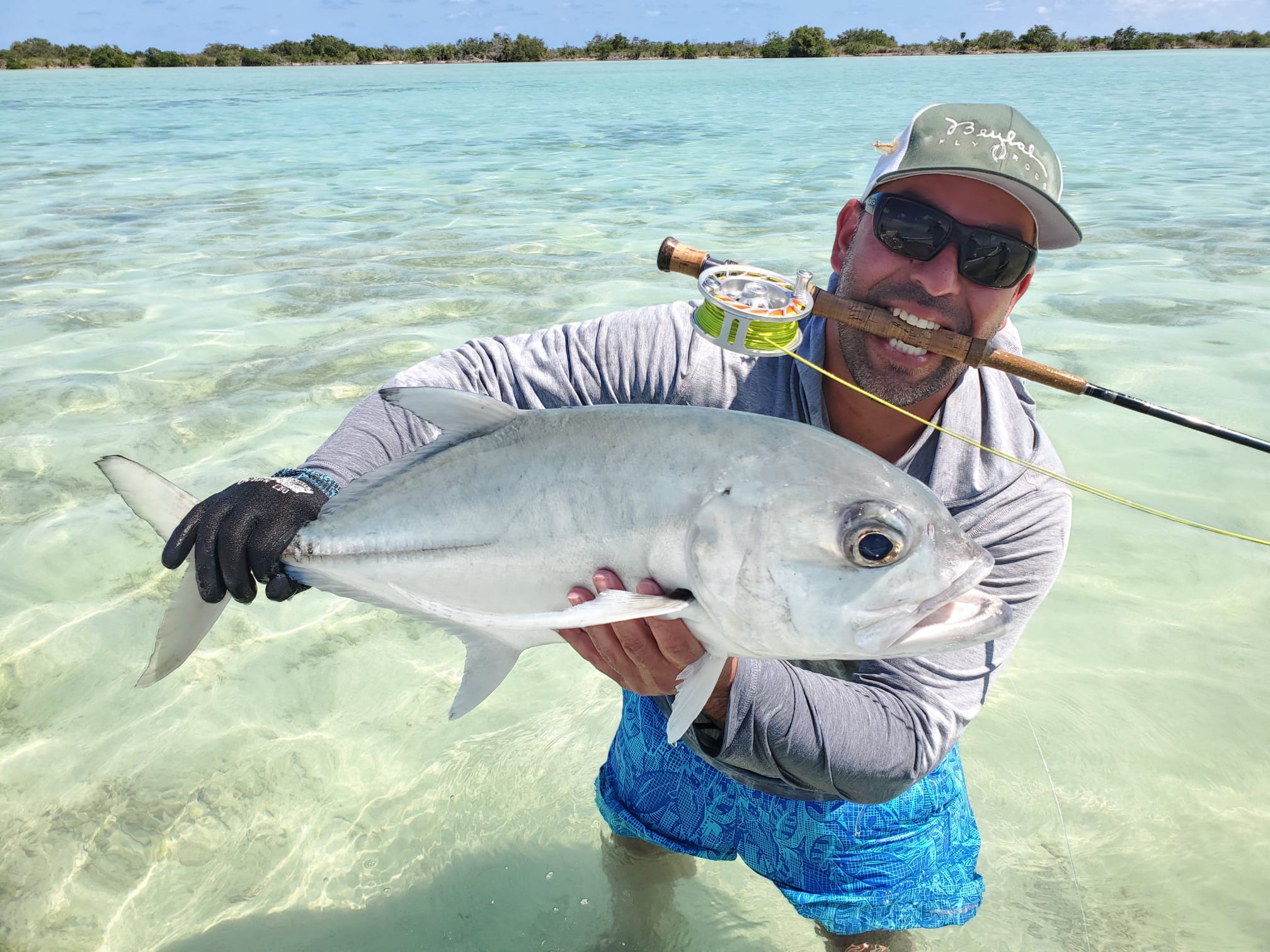 The next day more shots at the elusive permit. We suddenly spot a large pack of jacks with an older and experienced guide, Nato. Swapping rods has now become a smooth operation with my fishing partner Scott Petersen, a permit whisperer in his own right.   I find a 10 wt. rigged up with a black and purple beauty of a fly tied by Tim Sheran at Vineyard Vise in my hand and BOOM!!! That sound of the reel sizzle that we all dream of. Jacks are, in my opinion, one of the most exciting fish to catch on a fly rod. Aggressive eats, insanely long runs and just pure brute force. The 10 wt. gets bent and the smiles and celebrations start up as I begin to slowly recover what seems to be a football field’s length of backing. The jack comes in, and the cold cervezas are taken out of the cooler.  Then the realization that this was not a typical jack crevalle, but a horse-eyed jack! This species is not generally a resident of the flats and comes into shallow water for an easy meal. And, according to Jesse, was a lodge record for that species as they generally stay slightly offshore. I really needed that win. 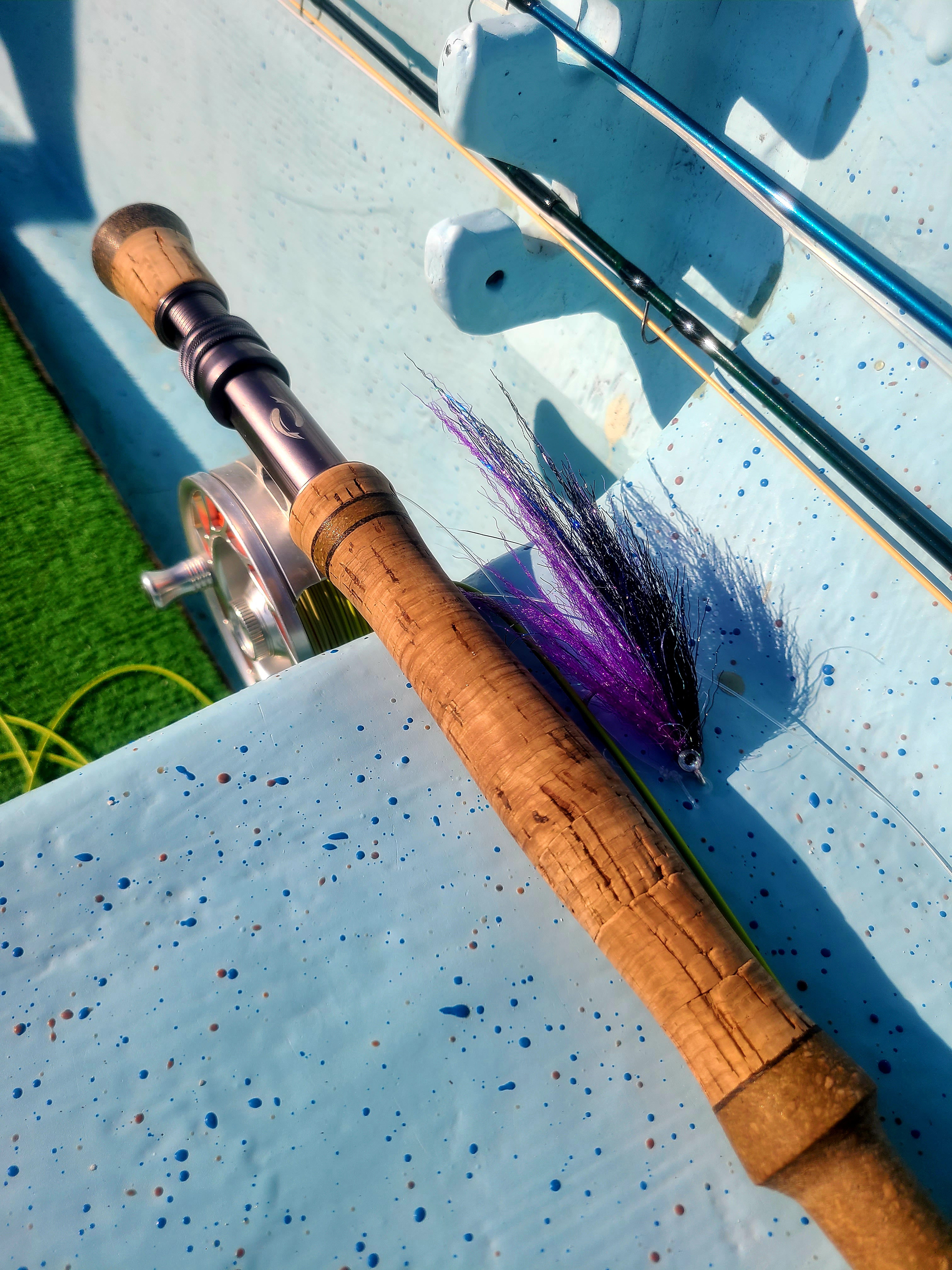 Day 6… So, as you may have gathered by now, the number of fish in the boat on my part was minimal. Shots at tarpon and brief hookups, smaller jacks, pesky, small snapper that always seemed to eat my crab as a pack of feeding permit approached. The shots at permit were what I dreamt of at night. The strange obsession these fish create was something I hadn’t anticipated at all. Get on the boat and the guide asks what you want to do and the first thing out of your mouth becomes: “PERMIT, VAMANOS!” And the guides on day 6? Pio and his brother Reuben, aka. Los Hermanos Locos. Now let me start by saying, that the eyes on these boys became apparent immediately! We are firing line at permit on a one in every 20-minute pace. On the boat. Off the boat. The day is running like a machine, and let’s just say we all start having a feeling. Scott happens to be one of the more experienced permit anglers on the trip, and we have 8 eyes on the lookout at all times for these sneaky fish!  I fire off a wind-assisted 80 plus foot hero cast to a monster 30 lb. permit, and we all brace for impact. Refused! 3 tailing 20 lbers after a brief stalk and cast. Vanish without a trace. The cruisers just won’t cooperate. But at this point, you are TOTALLY used to this! So I get the bow for the last stint on the last day. We are meant to be back at the lodge at 4 PM and it is now 3:45 and we are 40 minutes out. Overtime. But Los Hermanos Locos simply don’t give up. 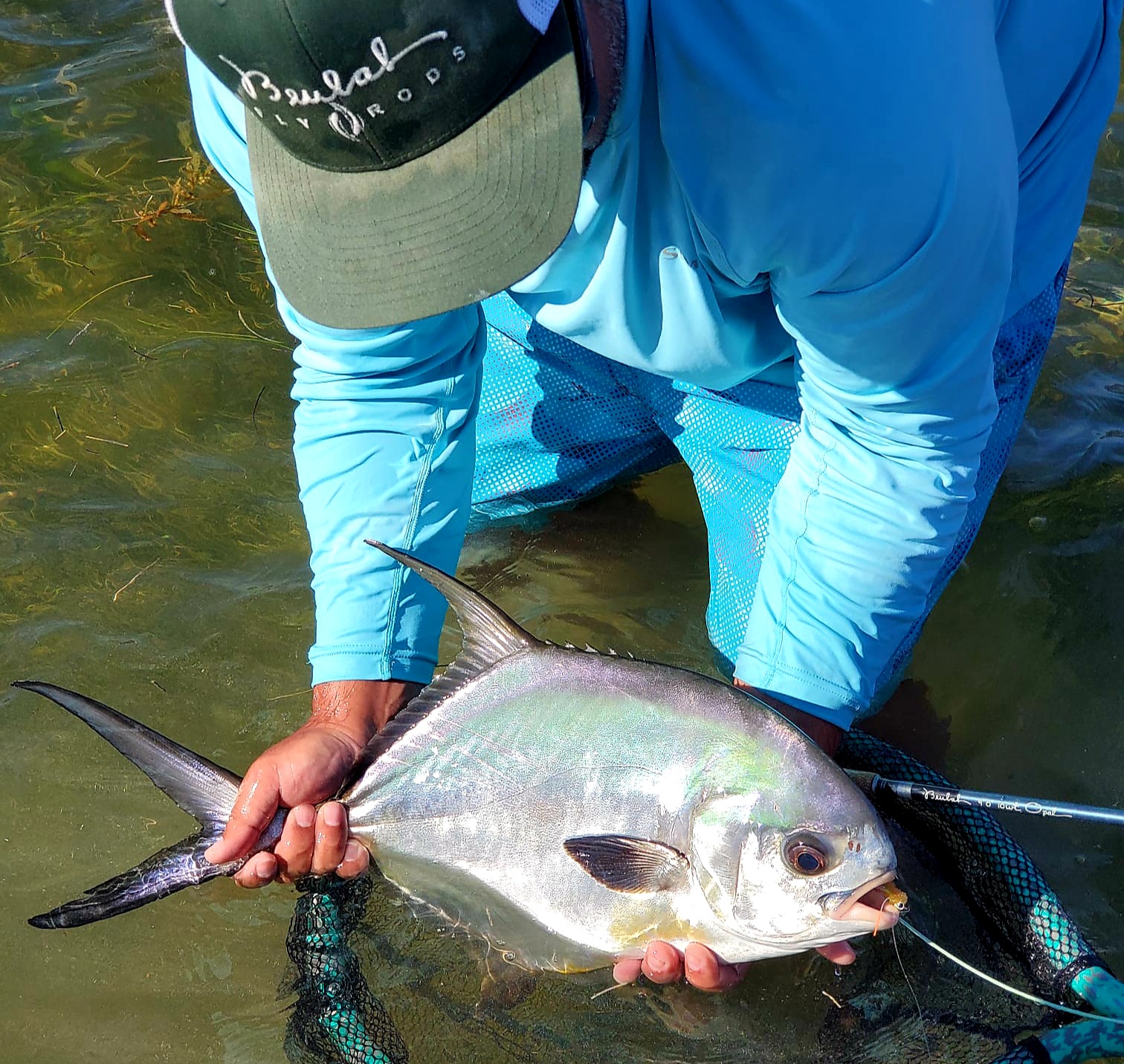 We enter a shallower area with sargasso galore. The fly I have on is too heavy and as Pio throws me a crab straight off his hat, Reuben announces a feeding school to our 11 o’clock moving away. Pio poles hard as I frantically attach the crab and bite the tag end off with my teeth. And just in time. The permit turn and start swimming directly towards the boat in a V-formation. Needless to say the wind is blowing directly at me because… well that’s what wind does. But I have the fish in my view, they are milling, and I lay out a perfect cast with my Opal rod leading them by 5 or so feet. One slowwwwwwwww strip and their body language changes. The feeding schools will compete for food, and this is EXACTLY what is happening. 2 slightly faster strips and there is a wake behind the crab. I know immediately that this is it. The eat was not so subtle, a quick strip set and I’m in. Permit aren’t speed demons in comparison to jacks, but wow… they just don’t want to come anywhere near a boat. Multiple runs and some delicate work on 16 lb. tippet and it is in the net! 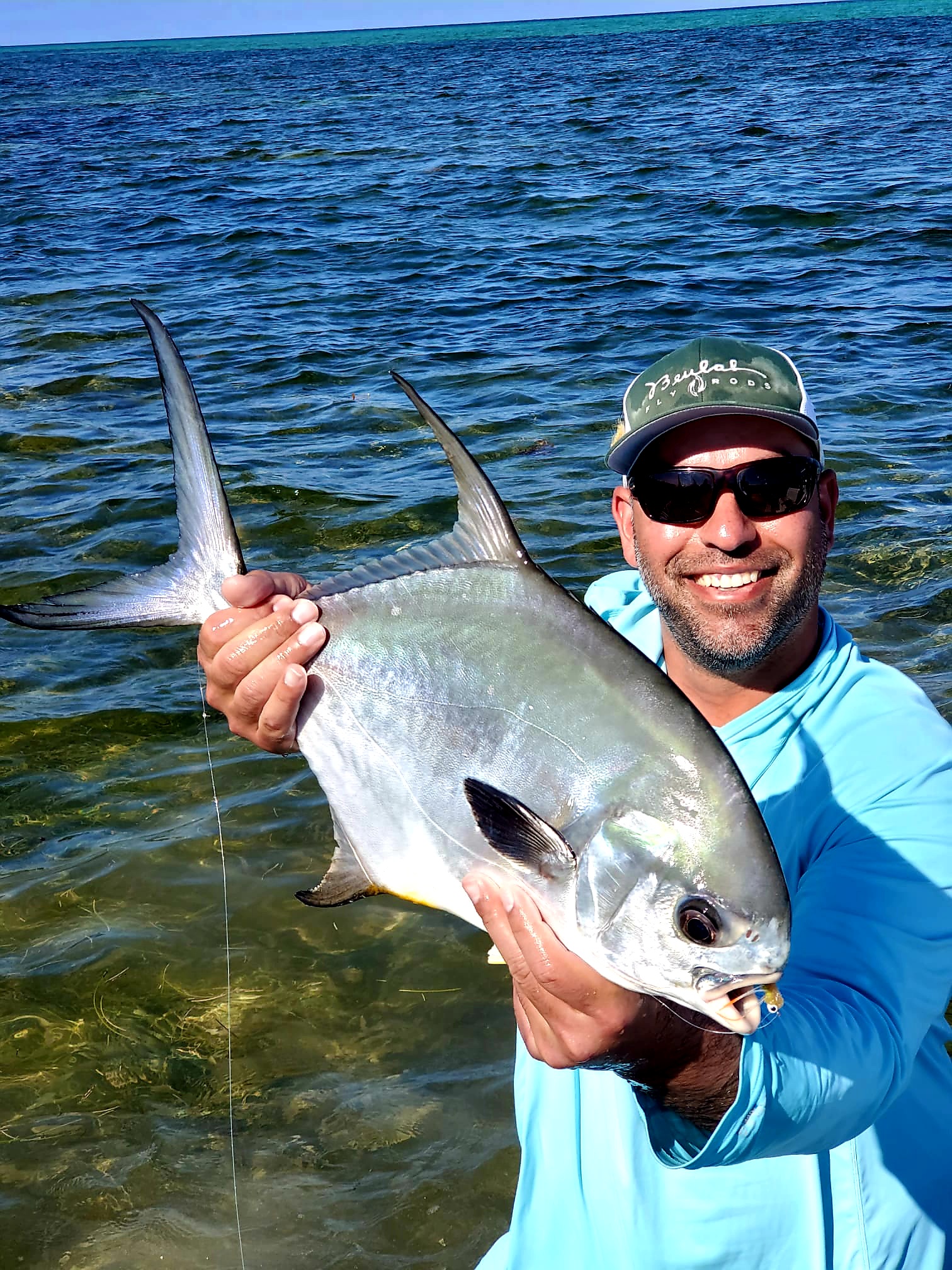 Now I’m not exactly the emotional type. But let me tell you: when you just spent 6 plus days trying to accomplish what some would describe to be an improbable, borderline impossible task?? It feels euphoric. The whole boat erupted, and it almost seemed like we high fived until we all got tennis elbow. Hands shaking, legs trembling, I picked this beautiful creature of the flats up, and the smile plus the sweat-stained cap say it all. In overtime, on what really was the last cast of the trip, I achieved my dream. 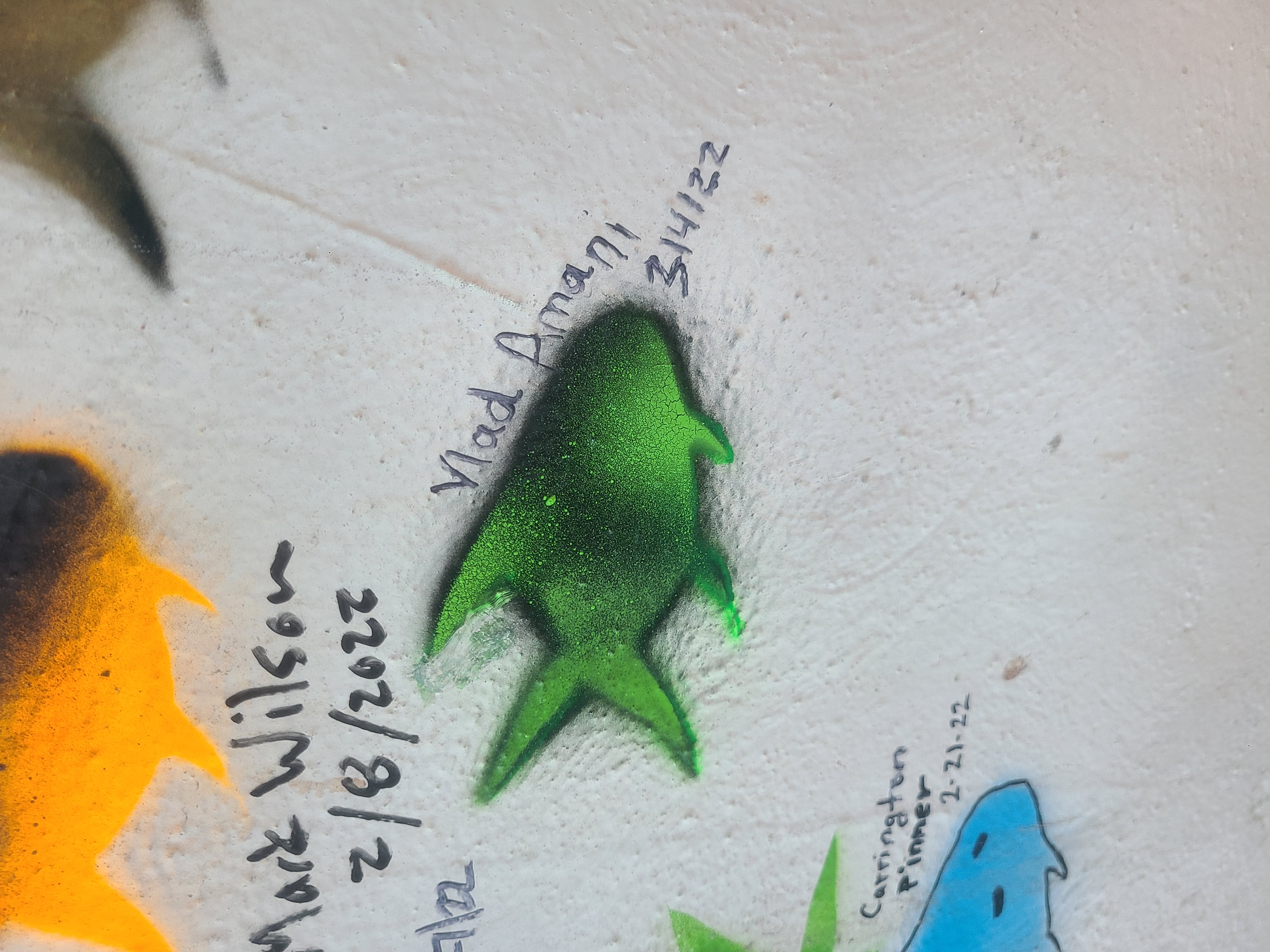 Everyone knew something special had happened as we arrived more than an hour late to the dock. Jesse and a small gang came running down and the excitement was palpable. All smiles, Bluetooth speaker pumping out some Jerry Garcia courtesy of deadhead Scott. Beers and tequila with Los Hermanos Locos at the lodge. Just a feeling of peace and relaxation. And I will never forget what Jesse said as I came out of the boat: “I knew today was the day. Your attitude and refusal to give up caught you that fish.” And I fully agree. The permit was painted on the wall of Xflats lodge, and I joined a group of anglers that faced innumerable variables to catch what had become, and is now, a fish that will be a part of my dreams forever.