and decided on a 5 wt., a 4 wt., and a 3 wt. 10 foot Czech or European nymph rod series. Taper, guide spacing, reel seat, weight, all of that was bantered about for a couple more years until James had his factory build a one-off prototype of the 3 wt. and 4 wt. for testing, Summer 2013. We had the 5 wt. dialed in already and Jared Paine and I were fishing with it as of Summer 2012.

What do you do when you have something like that in your hands? Go to Michigan. Traverse City. The Ausable, Manistee and Pere Marquette. The home of the “Adams” dry fly. I could see no other options. I had my sights set on two rivers – the Jordan and Boardman which are close to Traverse city. If you ever have a chance to go there you really should go. For the fishing. For the amazing fruit and produce. And the people are great.

I went in August. The water was a little warm, less than ideal. I checked out the Jordan and access wasn’t good for Czech nymphing so I defaulted the Boardman. It’s beautiful. 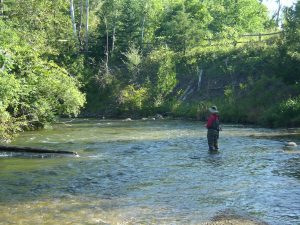 The 3 wt. is capable of a really nice tuck-cast. 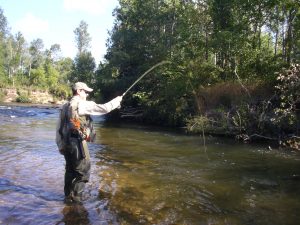 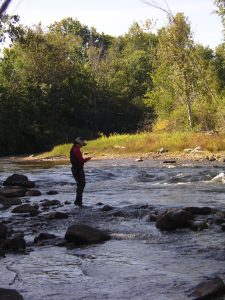 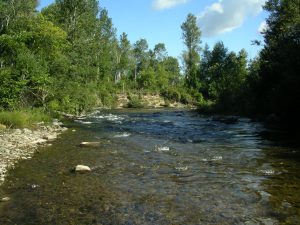 The water was heavily silted by a recent deconstruction of a gravel dam at Brown Bridge. We saw very little life in the water – bugs and fish were scarce. After a few hours we headed back to where we parked.

The scour from these bridge culverts gave us a clear gravel bottom to fish on. 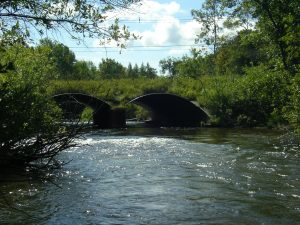 My heart was pounding – I knew I was going to catch the only fish in this river, and here it is: 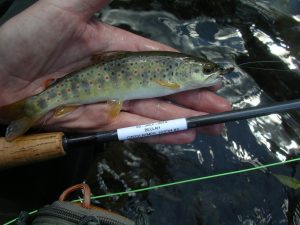 My fear was gone. Our 3 wt. CZ rod not only didn’t repel fish but it attracted them. This protype rod and the 4 wt.were almost immediately sent to the CZ Republic for field testing. I wasn’t ready to give them up yet!

The next day we fished the skinny water above Brown Bridge where the gravel dam was. Pretty but the raft and canoe traffic and the lack of high-gradient were definitely not in our favor. I asked around and someone recommended the Pine River, about an hour south. We scouted the Pine until we found the right water which was above the raft and canoe traffic. All the people we encountered that were floating the Boardman and the Pine were really polite.

Here’s a glimpse of the Pine: 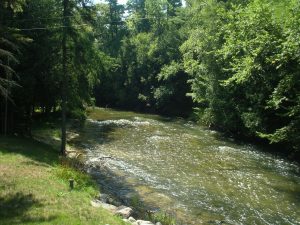 Perfect! A shot from the bridge looking upstream, the canoe put-in is just downstream. After only a few minutes I hooked a 12 inch or so brown on the 3 wt. He took a #10 golden olive CZ nymph. My wife was downstream and the fish bounced, I mean bounced out of the net as I was getting ready to take a picture.

The Beaulah 3 wt. CZ rod performed perfectly. I think it’s going to be pretty popular for a lot of different types of water and an upgrade for people who fish the Gray’s equivalent.