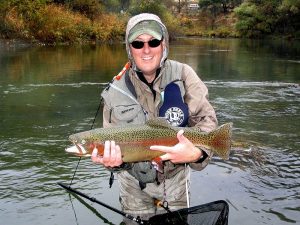 Around 2002 or so I was at a Mt. Tamalpais Fly Club Meeting and our presenters were Andy Burk and Steve Korbay on Czech Nymphing. We were shown flies, how to tie Czech nymphs, rigs, rods and techniques by both Andy and Steve. I went home and got to work right away. The “rod” poised between my legs was my second protoype CZ rod constructed on a Seeker blank. The first was a Thomas and Thomas Vector blank, plus I owned Sage 10 foot XP’s in 4-7 wt. All my 10-footers at that time were pretty decent indicator rods for both bank and drift-boat fishing, great roll casters, great at mending, and got the job done for CZ nymphing. I wasn’t overjoyed with the performance of these rods, nor any others that I fished, but I stayed optimistic. Something would someday come my way, given how the popularity of European nymphing techniques and technology was starting to permeate the fly fishing market here in the U.S.

A little bit about the picture – I sent this picture to a few people and it ended up in the hands of a CA DFG Biologist whom I shall refer to only as “Roger”. His response was a “reply to all” and I was blessed with his opinion. I laughed my ass off at his response. He claimed that the fish was a “mount” based on his observations and he justified his opinion point by point. I, of course, “replied to all” and expressed my opinion. “Roger” and I became quick friends and he may be included later in my tales.

Also, I sent a copy of this picture to Shane Stalcup. My friendship with Shane is worth another lengthy blog. Anyway, this picture was going to be in Shane’s book “Caddisflies, Top to Bottom”. He passed away before the book was finished. I’ve been in conversations for a long, long time with Shane’s mom and Amato Publishing about finishing the book for him. Enough said about that.

I was at the Fly fishing Show in Pleasanton in 2008 and bought four Beulah rods from James. The 4/5 and 5/6 Switch and 5 wt. Guide series rods quickly became my new favorites.

A couple of years later I went to the Spey-O-Rama in San Francisco’s Golden Gate Park because I knew James was going to be there and wanted to hang out and enjoy a couple barley sodas, learn a little something about spey-fishing and to get my hands on the new Beulah Platinum Series switch rods. Wielding a 6 wt. Platinum Switch rod with some kind of magic line they put on it I was casting across and out of the pond. Over and over again. I felt like a kid who just learned to ride a bike without training wheels. Then I cast the 5 wt. Platinum Switch. The answer was in my hands. I went home and fell asleep that night dreaming of shooting casts with the 6 wt. and making a Czech Nymph rod out of the 5 wt.

I returned the next day and told James what I thought and gave him some of my CZ nymphs and my improved version of the Andy Burk CZ nymphing leader. And this marks the beginning of the tale of the development of my three (plus one) favorite go-to flyrods. 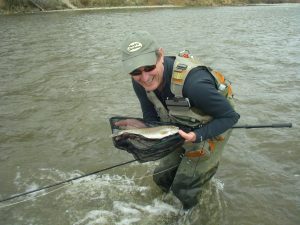 A preview of the result – a 5 wt. Beulah CZ rod prototype at work. As usual, it’s the “rod” poised between my legs while I’m holding a trout. More about the development of this rod series for Beulah to follow in future posts.