Friends, it was a tough fall.  Wait, let me back up.  It was a tough summer.  Remember the high water temperatures?  The endless 95-degree days and all that nonsense?  Yeah, it was a while ago, and it’s full-on winter now.  So…Never mind about that.

As I was saying, a tough fall.

Not many steelhead swam back to Idaho.  I heard a lot of them ended up in this river just over the border in Washington and Oregon, but I wasn’t fishing that river.  Don’t ask me why not.  I just wasn’t.  I was fighting the good fight, or whatever you call it, and imposing that fight upon my dad as well.  Poor guy, he just wants to escape his responsibilities and routine and spend a week and a half fishing for steelhead, and I make him do it on the biggest, trickiest, crowdedest river this state has, the Clearwater.  At least I don’t make him fish dry flies.

We didn’t expect much.  It was my only week to swing flies for the fall (more on that later), and fish counts over the dams were abysmal.  We weren’t completely disappointed.  In our second run of the second morning, Dad broke his three-year Clearwater streak of utter shit luck and landed this one. 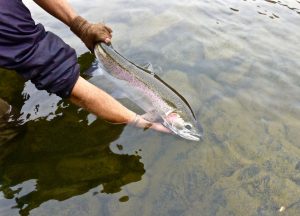 Same day, different run.  We kept fishing through the dog-day sunlight because, well, I personally drank way too much coffee to go take a nap, though that might have been the sensible thing.  I spent two-thirds of the afternoon’s run getting glassy eyed, watching my skater pull a pointless wake.  Why was I fishing a skater?  Because why not.  I love watching them, and I love that when a fish shows on your fly it feels like a magic trick made real-life.  On a river like the Clearwater, especially on a low-fish year, it’s not going to be about the numbers anyway (though to be honest, it never is, no matter where I am).  So the occasional fish might as well be special, really special.  I didn’t really perk up until the tailout, which felt inexplicably greasy.  Good sense might have said it was a little too fast, but I kept fishing it through the lip and into the first few scattered waves of the riffle, because who needs good sense.  They can hold further down in that stuff than you’d expect…unless, for a reason you can’t put a finger on, you kind of expect it…so I made sure not to even flinch when the first splashy boil blew up juuuust behind my skater…or when the second boil missed it as well, eight feet closer to the bank and two seconds later.  I might’ve said something that’d get you to the principal’s office in grade school, but I tried to act like Dec Hogan or somebody was watching, and suavely backed up several steps.  Tied on a little size 9 orange-bodied muddler with shaky hands and had at it again.  Took me several swings to get back down there, but he was in the same spot.  Yeah, “he”.  I got a few good looks as he was airing out around the middle of the riffle – another thick, wild b-run male. And then, there was just stationary tension on the line.  What the hell?  I hauled back slowly.  I could still feel some movement.  I read the water where my line seemed to come from, and put together the two and two that meant I was wrapped half around a rock.  (OK, don’t do anything stupid, you’ve got a big, mean, real deal fish short-leashed.)  I was getting ready to wade back out into the tailout above:  the rock in question was only about thirty feet from shore.  I could do it.  I could make this end well…and then I watched him thrash, half out of the water, and break me off. 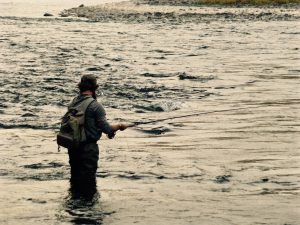 Portrait of a Beat-down’s Aftermath…He took just outside that bigger wave, and broke off not far from there as well.

That was the only steelhead I’ve hooked in the year 2015.

(Disclaimer:  I did leave for the majority of the fall season, and rowed a boat down the Grand Canyon, where there are zero steelhead. Not an excuse, but a pretty decent explanation.)

Anyway, dry spells happen, and they happen to all of us.  As they do, your odds get better and better.  Or so I like to tell myself.  I don’t know where my next fish will come from, or when.  I know it will eat a swung fly; one that I tied or a friend tied.  For now, for me, that’s good enough. 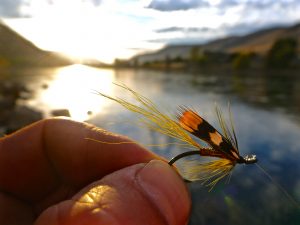