It’d been two years since I landed a steelhead.  I know that for a guy who writes a blog partially about fishing for steelhead and lives well within the range of anadromous fish in the Northwest, that seems kind of rugged.  Believe me, for a solid while it was just as rugged as it would seem.  After a while, though, my ego and I had a little chat, whereupon my ego chilled out and let the rest of me enjoy swinging flies with, as we say, “no expectations, but complete confidence”.

My dad makes a trip to Idaho and/or Oregon each fall to swing flies for steelhead.  He’s been hitting the milestones just as slowly as you’d expect, yet steadily as well – first steelhead, first Clearwater fish, etc.  This year we ended up spending a solid week on the Clearwater.  Fish numbers over Lower Granite plus in-river conditions made it seem like a good idea, and on our first night, at one of our favorite runs, he caught this fish: 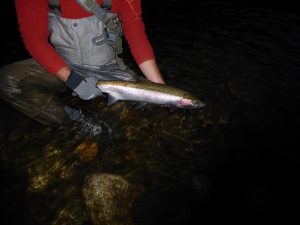 Not a giant steelhead, nor even a particularly spirited or wild fish.  But a fish nonetheless.  A side note, is that he was throwing a brand-new AeroHead on a brand-new 13’2” Platinum 7.  Brand new as in, I just peeled the plastic off the cork in the parking spot before we stepped in.  I’ve caught steelhead on two brandy-spanking new Beulah two-handers (both fish from the very first run each rod swung), and now, I enjoy reporting that my dad’s done it as well.

The next day, my friend Ian and I found twin hatchery hens.  It was starting to be really easy to step into runs with no expectations but complete confidence. 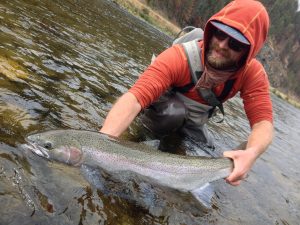 The next day?  No pictures, but Ian and I each hung big, solid fish on dry flies.  It hammered rain, blew, and for the second day in a row, we never saw another fisherman.  I repeat, we were on the Clearwater…where the bejesus was everybody?  Never mind, I don’t care.  Even if we hadn’t been feeling fishy, it would still have been worth it to be up there all by ourselves.

The weekend came.  Early on we found a couple, no fish to hand but… the rain fell, the water rose, the bro-show descended, and the fish disappeared.  Hope faded. 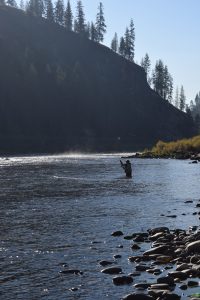 We ended up unintentionally staying an extra night.  I’ll spare the long story, but you know how it can be:  you have stuff to do, somebody to meet; and it takes longer than planned, and on top of it they’re late.  Not a big deal, but it’s not worth starting the tortuous 3-hour slog back home at nine at night.  I wasn’t looking forward to it anyway, and I think both Dad and I were relieved when we were able to admit to each other that it’d be fine to just sack out in the back of the truck again, hit the Upper Spalding Coffee Grinder Hole in the Wall Grease Bucket run in the morning, and head home at a leisurely, medium pace once the sun started baking the river.

Morning brought the river valley’s first frost, eerily swirling low-down fog, and back to back big, chunky fish for both of us.  Interestingly, Dad fished his first pass through the run without touching a fish.  When I got one behind him, he got back in and found his personal best fish to date.  Not a lot of things in my life seem as much worth doing as when I can be a part of my dad’s excitement over a very big, strong steelhead.  I’ve seldom seen him so elated, and thus, I can’t help but hope that there are always steelhead for him to get elated about.  The “sport” (or whatever you’d call our little subset), and the rivers it plays out on, may be getting pretty thick with people, but I’d recommend anyway taking somebody steelhead fishing that’s new(ish) to it.  Make sure it’s somebody who deserves it, who will take care of it, if you know what I mean.  And that they won’t give your money spots away.  If they stick one, you’ll feel that excitement, vicariously, all over again.  It’s worth it. 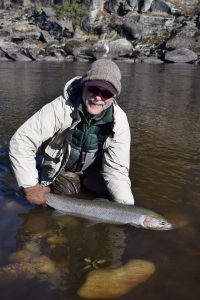 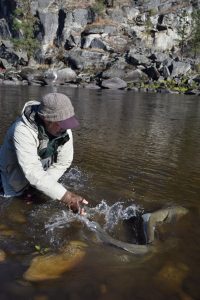 We came home, and Dad flew back to Maine.  If I can get all my firewood set, plus my garlic planted, and the yard and house ready for winter, I’ll be back out again and I’ll write about it.  Meanwhile, know that this is happening on rivers of the Northwest, and make yourself a part of it if you can: 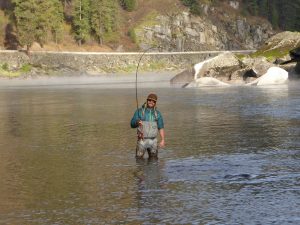 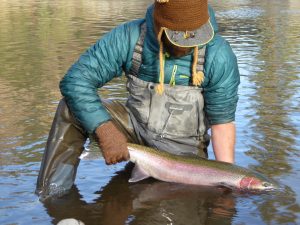 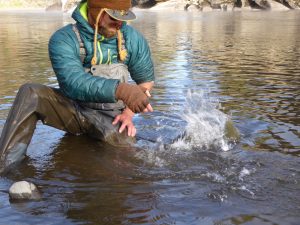