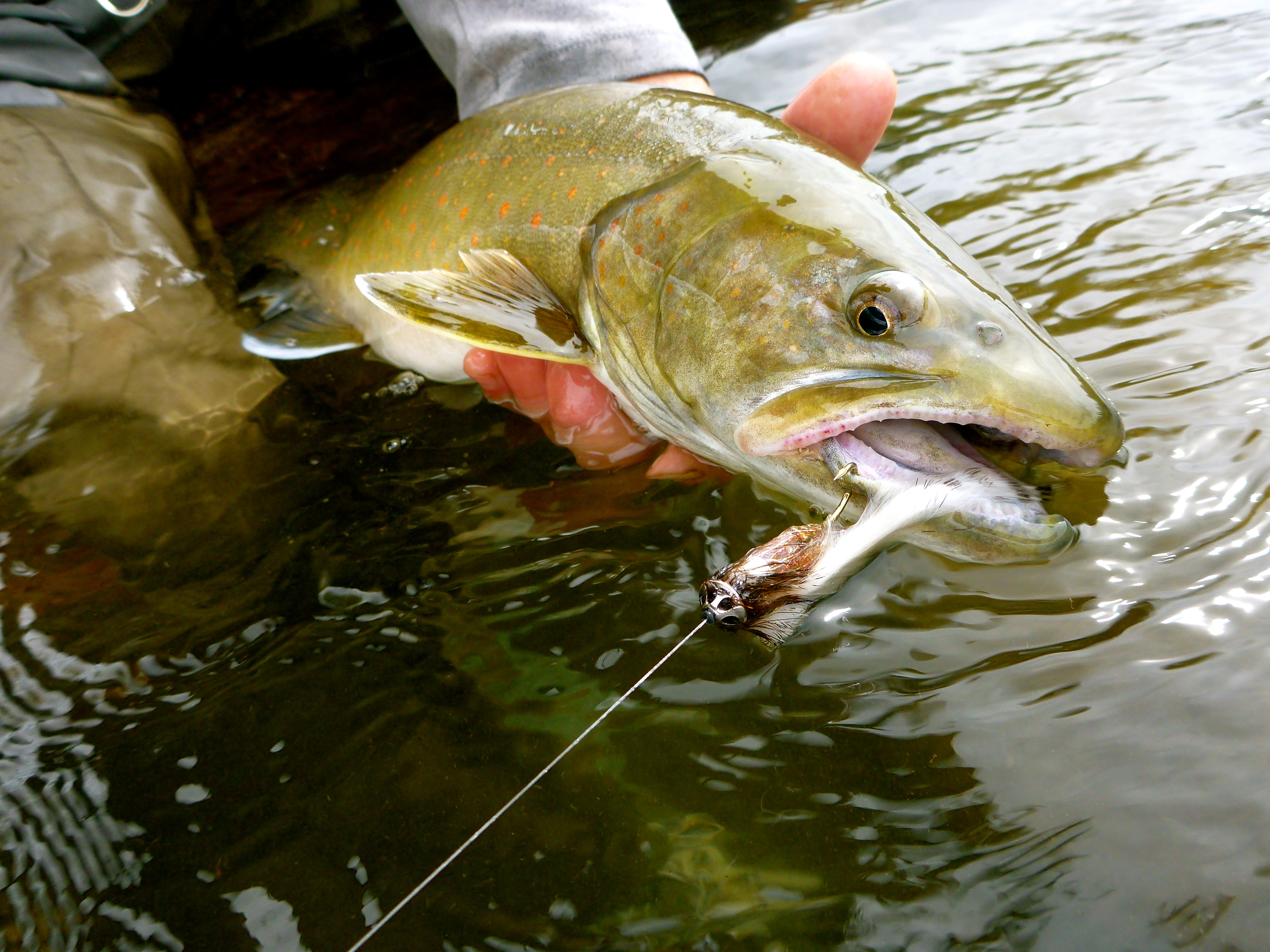 Several years ago, some friends and I came upon what became one of my favorite outdoor films:  a production called Signatures.  It embodied most of what I believe in about the work and play I take part in; but to the point, something said by one of the film’s featured Japanese fly-fishermen stayed with me.  He said that in Japan, they didn’t fish for particular species as much as they fished seasons – one season, a particular trout would be available; as that season faded, the cherry salmon or some other species would show up or start feeding. This glimpse of fishing lifestyle struck a chord with me then, as I realized that I’ve ended up living and fishing a lot like this.

In central Idaho, most of the woods and waters are still pretty wild.  Rivers are freestone and vary widely in flow and temperature throughout the year.  By late fall, say, most of the fishing in this area is laid to rest, replaced by backcountry skiing the snow that becomes next year’s river.  In the spring, the rivers swell with this runoff and rush greenish-brown and icy for several weeks.  As the snowpack and its attendant melt recedes, the landscape is just starting to fluoresce into its short-lived vibrant green, and some of the trout that we identify with these freestone rivers begin to creep back into the summer places from which we know them.  In other words, we fish seasons. 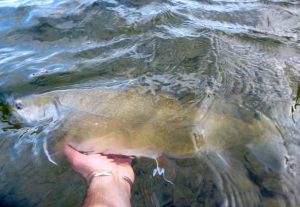 The middle of spring’s season brings back into the rivers a predator fish unlike any other I know of.  The bull trout hasn’t had an easy go of things – in a time recent enough that your grandfather could remember it, a bounty was actually placed on them with a cash reward for their tails.  The theory was, of course, that the bull trout’s appetite for chinook salmon smolt was responsible for the salmon’s decline – never mind the overharvest, slash-and-burn logging, downstream construction of massive fish killing dams, or any human factor.  So the bull trout were intentionally killed by anglers, then decimated by the same salmon decline for which they were blamed.  Put in these contexts, it’s a testament to their overall toughness that they’ve managed to survive as a species at all.  In some out-of-the way places, they persist, and maybe even almost thrive.  They’re never an easy drive to get to, they’re never exactly abundant, and there’s never a guarantee that you’ll even hook one.  The camping’s not the most comfortable this time of year either, but this is a hunt that is always worthy of the season. 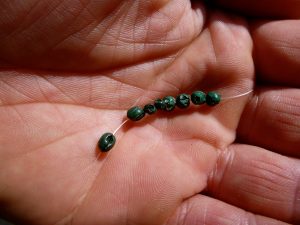 They’ll eat dries every now and then, but adding this chunk of tungsten makes it a better bet.

Did I mention the fishing for them isn’t the simplest either?  Honestly, if I thought I needed fewer split shot to get to these fish, I’d use fewer split shot.  I guess one could say this is trout fishing, but like the fish themselves, it’s a pretty unique form.  In no other situation have I ever caught such ugly, beautiful, angry fish so close to my rod tip, or seen such an aggressive fish be so wary of the goings-on above the water’s surface.  More often than I probably ought to admit, I’ve watched bull trout, who are spoken of as being voracious to the point of true stupidity, utterly ignore my fly – hell, several flies – on swing after swing.  The more I find them, the more I learn about them, the more I respect them. 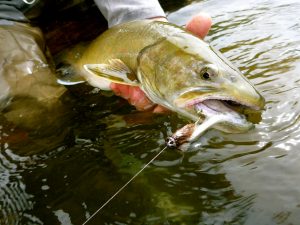 In this season, my 9’9” Platinum 7-weight thrives.  Throwing a half-ounce of split shot and a cone-weighted tube streamer.  And by “throwing” I mean getting it anywhere from ten feet away to across the run to that little boulder cluster that might be just enough of a current break.    It’s got enough length to manage what a couple buddies and I half-jokingly call “Czech streamering” (more on that in another post, perhaps), but is compact enough to sneak through the willow tangle of a tight little canyon.  And though you can probably get the biggest, toughest bulls to hand with a smaller rod, I’d prefer not to exhaust them.  Even with this setup I pretty much always feel like we’re an even enough match.  I’ve said it before, they’re tough. 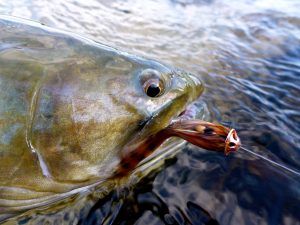 I discovered bull trout the first week I lived in Idaho, and it’s been a love affair ever since.  I love out-of-the-way, I love hidden in plain sight, and I love the glamor-free approach that bull trout demand.  I love how they sometimes crush a baitfish fly in a 180 degree head to tail turn, and how they sometimes seem to just gently materialize as growing tension upon it; as if to eat something before it knows it’s dead. 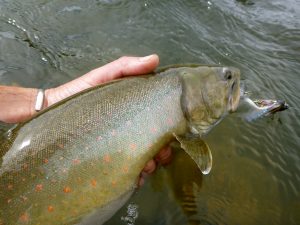 This fly knew it was dead as soon as that mouth closed on it.

This week, I watched a second bull trout circle and slash around the one I was fighting, trying to eat my tube fly that had slid up my leader.  A couple times I saw it actually take the second fly, shake it like a dog with a rope toy, and release it once it realized something wasn’t right.  I landed the one, and never did tempt the other back.  Half an hour and three or four holes later, I hooked the most vibrantly colored cutthroat I’ve ever seen. 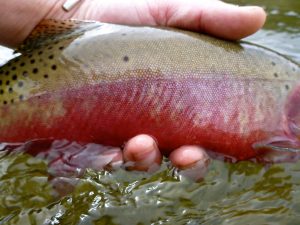 I’ve never seen one so well-dressed.

I’ll admit that some of my favorite things about the season are actually not in the river at all.  When the spring rain comes around and switches off with some warmer days, some good food grows in the woods around here.  It’s been a great season for mushrooms such as morels, and other little wild edibles.  In fact, I found a good wild onion patch right after I released that cutthroat.  They ended up garnishing a batch of posole, and also transplanted into the greenhouse at the warehouse I guide out of.  Hopefully they’ll seed out and keep our food seasoned for a few years to come.  Anyways, that’s all I have for now.  The rain just let up a little, and it’s probably time I headed to the river; this season isn’t going to fish itself. 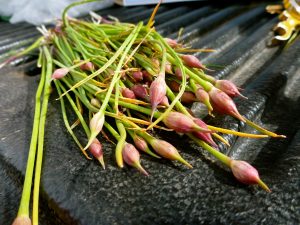 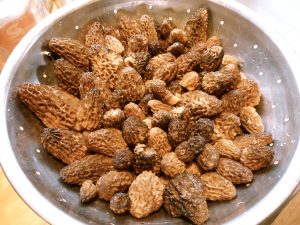 Morels, fresh or dried, are amazing. 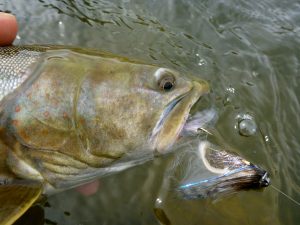