Like in an old, classic song, it’s summer time, and the living’s easy…as least as long as you’re not a westslope cutthroat in range of my drift boat.  If you were, the living would get harder for the minute or two immediately after you ate that little hopper fly, and then get easier from there (albeit with a sore lip).  In other words, right now, the guiding’s easy in the hinterlands of Idaho.   While others on their storied tailwaters are stressing out over matching their hatches, we’re a long, long ways from the fly shop, educating a lot of medium-sized native trout with a few larger ones thrown in to keep it interesting.  Sometimes it looks like this: 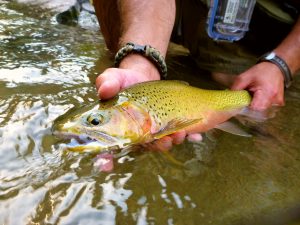 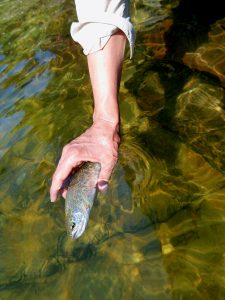 …and that’s okay. Because I’m mostly teaching absolute beginners how to fish, and it’s a cool bonus that they get to learn how to catch fish while they’re at it.  And also because usually it looks like this all around:

Anyways, that’s the short story of what’s happening on the clock.  Off the clock, I’m staying off the beaten path and trying to find the bullies of the schoolyard.   I’m using a rod that spans most of the way across the creeks I’m fishing, but after weeks of dog-day heat, those creeks are where the cold water is.  And where the cold water is, the river wolf will be also.   Fishing a 9’9” rod on a 15-foot-wide creek, it’s not easy to stay out of the bankside foliage, but it’s worth it, since every now and then (and not very seldom, either) this sort of thing here happens: 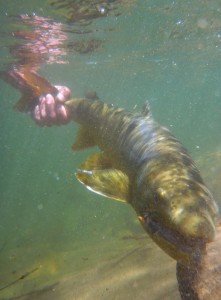 ….and I like to be prepared when it does.

I’m talking about heavy tube streamers twitched through plunge pools, beers hidden in the creek at the trailhead, and not seeing another  Chaco or wading-boot track all day.    I’m talking about a huge gill-flaring ambush from a top level predator.   You can have Silver Creek, the South Fork, the Henry’s, AND the Madison, just for good measure.  Or whatever you want.  I’ll take….well, I’ll never tell their names or where they are, but I’ll take my little secret-squirrel creeks any day.  For their remoteness, for their solitude, for their beauty, and for the large, carnivorous fish they often hold.

On a sort of side-note, the Middle Fork last week looked like this for a day after a stiff rain: 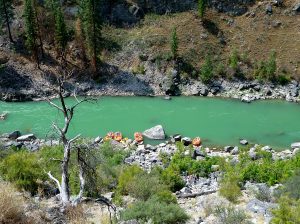 My like-minded brethren (and sistren) will know what this makes me think of, which is this right here: 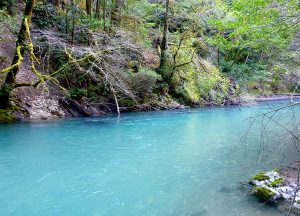 And there are only another few short months before that happens.  In between, though, my visions of the future include plenty more cutthroat for the rest of August and all through September, bull trout returning voraciously from spawning grounds, summer steelhead in the Idaho and Oregon high desert country, and fat-ass wild rainbows eating swung bunny muddlers.  Between now and next time, somewhere in there is where I’ll be….though not, necessarily, where you can find me.