Check out the Baja Mexico slideshow.

For those who braved the hurricane devastation and threat of Dengue fever, the Baja bite was wide open last week. Sardines have rained down on the peninsula and with them came hungry fish of all kinds.

Our trip started at team Beulah’s usual Baja haunt.  Flyfishing, by any other standard, would have been considered excellent but by Bahia Buenos standards it was so so. A reunion with old friends at the quincinera of a very good friend’s daughter made up for it. After much celebration, and a couple days of fishing, we decided to chase our commercial fishing compadre down the coast. The rumors of a tuna bite in the area had us packing up and heading out early. It proved a great decision and ended up being one of the most productive 24 hrs. of fishing I have experienced in Baja.

A pre-dawn ride, complete with ten miles of hurricane thrashed dirt road lead us to a primitive winter fish camp with some of our local captain friends. The greeting was curt; “Hay Atun?” Response: “Si …muchos!”, and he wasn’t lying.

A hundred feet from shore lays a blue hole and in it, 40-80 lb. yellow fin tuna were jumping and commercial pangueros had rods bent as they doubled over in exhaustion battling the big fish. We rode past the spectacle with Capt Texas confident we would find a more suitable sized fish for fly fishing. Ten minutes later it only took a couple handfuls of sardines to get the 15-30 lb. tuna popping. We had Beulah Opal 10 and 11 wt. saltwater fly rods rigged w/Serum fly lines at 350 and 400 gr., 20 lb. tippets and sardine fly patterns. The yellow fin tuna were hungry and plentiful. These fish are as beautiful and strong as they are tasty. They kept us busy all afternoon and we even had a few Dorado 15-25 lbs. come to our party as well. If that wasn’t enough sea life, we watched a 200 lb. blue marlin chase one of our hooked tuna beneath the panga. I know this all sounds too good to be true, but it got even better.

The next morning we were flying out at 2:00pm, but had a couple hours to fish in the am. With Texas’s convincing, we decided to stay in close and go for roosterfish. Again, it was only a couple minutes, a few sardines tossed less than a hundred yards from where we launched, and we were casting to roosterfish. Fish 15-60 lbs. busting all around us. These fish were aggressive and seemed not quite as educated as the fish to the North, which see flies all spring long.

We landed a couple Roosters, lost a few and even landed some large skipjack for commercial sharking bait. Within a couple hours we exhausted our sardines and it was time to get cleaned up and head home. 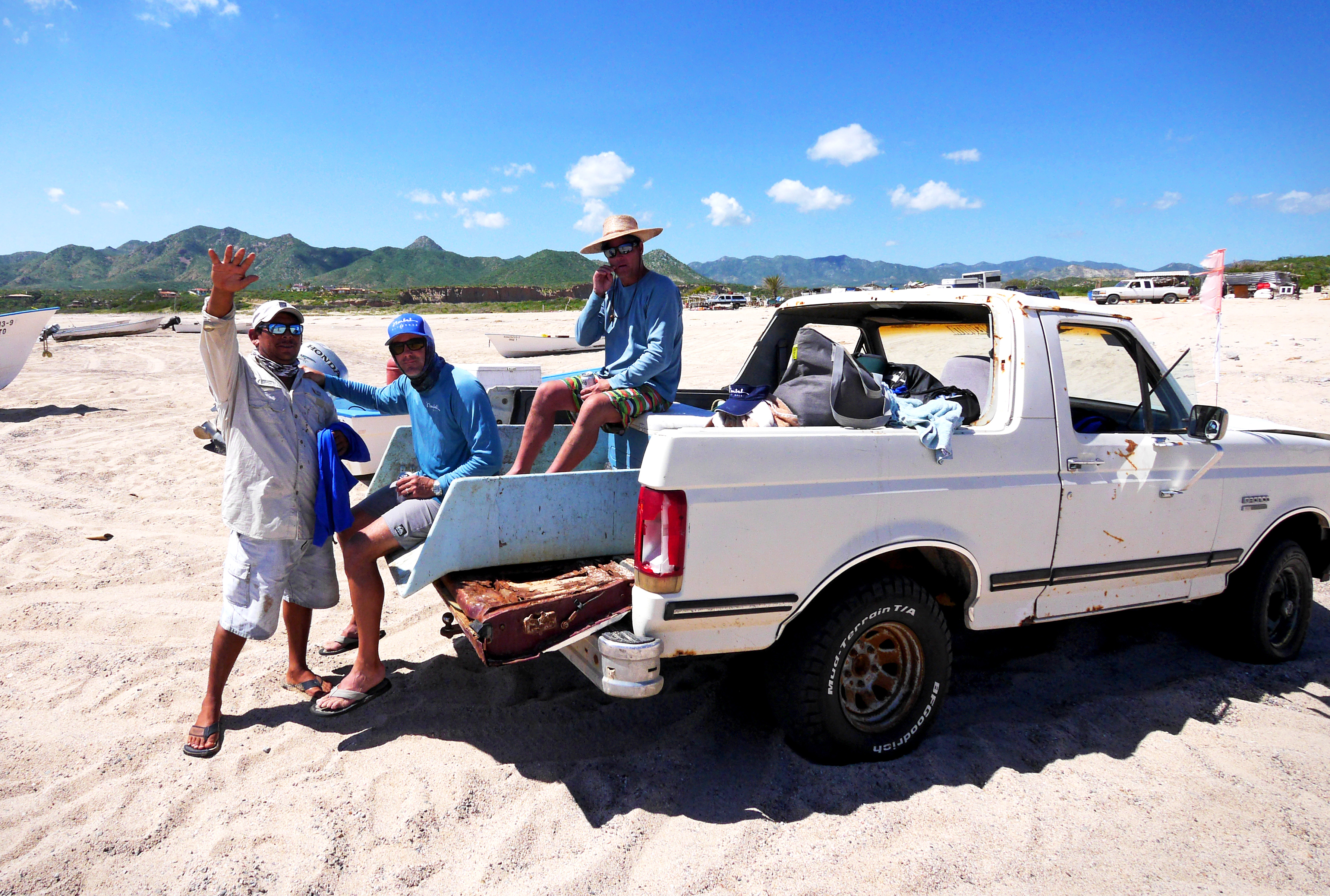 The ten mile ride down a dirt road into a primitive fish camp, along with the rides in beat up pickups and worn commercial pangas, was a throwback to old Baja and simpler times. The trip was a re discovery of what Baja used to, and still can be with a willingness to venture, explore, and trust the word of old friends who have fished these waters since childhood. Thanks to Texas, Mark, Marcos, Marisol, Hugo et al for laughs, beer, fish and friendship new and old.