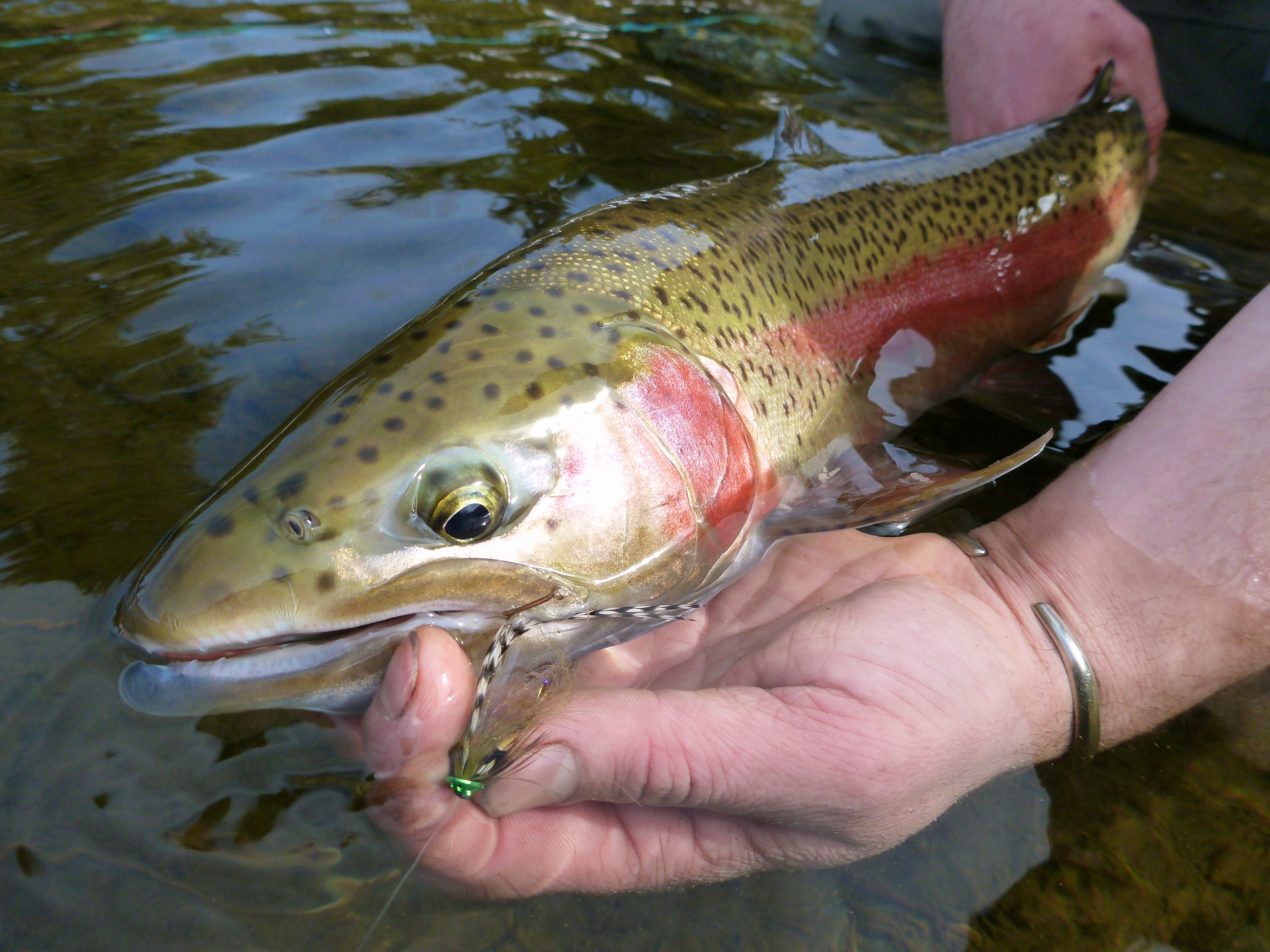 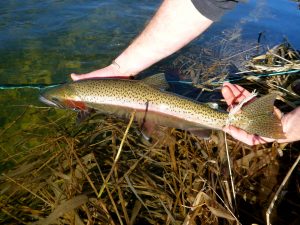 Finally, in mid-February, I got a spare day while the sun shone.  Hadn’t touched a fly rod for a good long while, and hadn’t touched a fish in a little longer.  For a couple months it had seemed like we were having a real winter-  powder days, temps up and down, decent snowpack stability…and then something happened.  I guess it happened all over the northwest, and it was called February.  It was disorienting, and kind of disgusting, until one got used to it.  It was dry, it was warm, and it started sucking August and September’s water right out of our mountains.  Anyway, it took us a while, but my friend Stevie and I realized things were a month or two ahead of schedule.  I patched a new crack in my old canoe with Gorilla tape, and we floated an afternoon on a tailwater that runs an hour or so of reckless driving out of town.

To be clear, it was a steelhead time of the year.  A little less than a day’s drive away, chrome-bright fish were ascending coastal rivers.  Three hours north, summer-run fish hold in the Big Rivers and will sometimes eat swung flies like it’s early November when the water warms up….why, then, do we choose to stick close to home (at least for the moment), and swing up trout with our spey rods?

Well, for one thing, because we can. 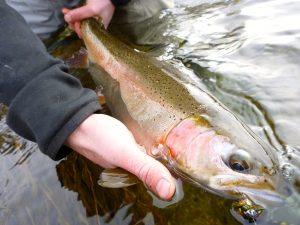 I know I’m not the only one who’s noticed the growing popularity of swinging for trout.  Can’t say I see many flyfishing neophytes picking up a small spey, or starting with soft hackles and muddlers, but it’s at least gotten ahold of some of the more dedicated.  I’ve even seen a few videos showing up here and there that (rightfully, I say) make it look pretty soulful.  Personally, I like what I think it means about the fly anglers that are taking up the trout swing.  Because what I see are anglers who are patient, who are slowing down.  Anglers who are trading their bobbers (I’m not knocking it- I’ve nymphed a lot, and I enjoy it)  and higher fish-counts for a change of pace.  It’s a slower pace, to be sure; but that’s the good part.  I’ve learned to slow down in a lot of ways from swinging flies for trout and steelhead both, and I think as a result, I enjoy fishing more than ever, not just catching fish.  Turns out, you can be focused on presenting a deadly swing, and also still take in the fantastic wild creatures and wild lands that tend to surround trout and/or steelhead rivers.

Anyways, back in the spring-like reality of February,  Stevie and I did pretty well.  It’s not often you get to switch off, fish for fish, several times in the same run.  If I’m being honest, I’d say we were elated.  My 12’6 Platinum 6-weight got its best workout in a long time, and nothing that got tied to it was born and raised in a building.  Would either of us have traded the afternoon for a scary-big winter chromer with sea lice?  Well, …..maybe.  Not sure I could even answer that, though I’m the one who asked it.   But it doesn’t matter, because we couldn’t trade it, anyway; and what we had right in front of us was more than enough. 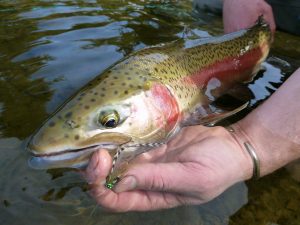 In the month and a half since, things have been a little slower.  The dam on the upstream reservoir opened quite a bit, no doubt to fill the suffering impoundments away off where it’s dryer; so the fish are a little more spread out, and you’ve got to work a little more for them.  Just how I like it. 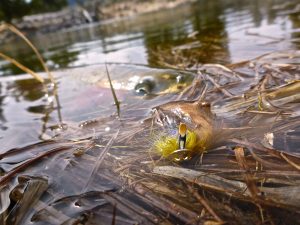 Last of the day, on another nameless Protube thing.