In September, I met Carl and his girlfriend Fredi at the Middle Fork River Expeditions boathouse in Stanley, ID.  They were on the happy side of a 24-hour travel day from his home in Florida.  I gave them an abbreviated introduction to the 6-day float beginning in the morning, and we parted ways for the night with handshakes and admiration of the Sawtooths in the forest fire smoke on the southern sky.  The next we saw each other we were boarding a little Cessna to fly over half the Frank Church Wilderness to the Middle Fork.

We landed, we floated, we fished, we ate, we drank.  I didn’t end up rowing for Carl and Fredi for a few days.  When I did, I noticed that Carl, while just as proficient as any of the other fisherman on our trip (and maybe with a stronger skill set than some),  – well, there’s only one way to put it – he was really laid back.  He was the rare kind of fisherman that’s a pleasure to row for, especially in a place like the Middle Fork:  he could hit every seam and bucket I pointed out, effortlessly manage a perfect drift, and then completely forget about it all to stare up at the otherworldly canyon around him.  He was a thoughtful guy; we talked at length about our lives, on and off the water.

But anyway…I want to highlight a fish that Carl caught just after lunch.  If you’re expecting a big stout slabby cutthroat, well, I’m sorry.  This isn’t one of those stories.  If I lost you by now, that’s cool – you can head back to Facebook or whatever.

We descended a steep riffle into a very steelheady run/pool on a 90-degree right, immediately above the rapid known as Haystack.  (Picture a 100-yard long steep boulder garden with sculpted pinkish-tan granite chunks the size of studio apartments.)  On the outside of the bend above Haystack is a fishy series of exposed and submerged boulders, seldom fished because of their proximity to a long hallway of wrap hazards.  A split-topped boulder begins the lineup of holding water, its upper four feet exposed at most flows.  Its upstream face is flat enough to form a little subsurface pillow…that is big enough to hold a decent trout…and it lies directly in the path of the bubble-line seam coming off a promontory of the left bank…   And so you get the idea: I pointed the spot out, Carl made a perfect cast and a perfect drift, and a trout rose and ate just above the boulder. 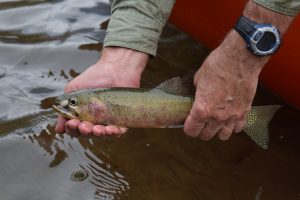 This was Carl’s fish.  As you can see, it’ll never be in a magazine.  It might hit fourteen inches on a good day, and it’s not exactly a physical specimen of a fish.  If you’re used to looking at pictures of fish that others display on various social media platforms and other interweb whatnots, upon first glance this might be a sad-looking trout.  In fact, I submit that if most of us caught this fish, we’d be immediately kind of unimpressed, if not straight disappointed.  You know:  You’d show him to your buddy, say something like “Not bad, kinda skinny though…” and release him, and get back to trying for your real prize – a fat, brilliant 16 or 17-incher.  Or whatever your ideal looks like.

I’d like to go a little deeper.  If you take a close look at this trout, you can see his belly and flanks are scratched up, scarred and healed.  The bottom lobe of his tail fin’s a little worn.  The bone structure that supports his dorsal fin is pretty well-represented.  His colors are a little muted.  What all this means to me, is that this trout led a pretty damn interesting life.  He was decidedly not the captain of the football team, who did well in college and grad school, and settled comfortably into a nice steady career and a sterile, featureless life in the trout suburbs.  Not a chance.  I’ve been making up narratives for him every now and then for some months – like maybe his natal spawning creek was a super hard place in which to make a living, and he barely made it down to the relative buffet line of the river with his life.  Or maybe he was just not quite big enough to throw his weight around in the creek, and got beat up and marginalized by the 15 and 16-inchers.

Or maybe, life’s just not that easy for any wild fish in any river, and we who would presume to prey, even if temporarily, upon these feisty little bad-asses ought to think that through from time to time; and let it sink into our flyfishing consciousness.  An inordinate amount of things have to go right for a trout to make it to an appreciable dry fly-eating size.

For sure, these are the musings of someone who has been getting into snorkeling more and more during time when he really could be fishing, just to watch trout and sculpins and caddis larvae and the like going about their lives.   On occasion it informs a fly pattern I’m developing, but more often I just like watching the Planet Earth episode that happens beneath river surfaces. Not to get too preachy, but I definitely see a majority of flyfishing happening to fuel ego-driven achievements these days, and a vast minority of it as an extension of someone’s naturalist curiosity about river life.

Which brings me back to my friend Carl.  When he briefly lifted his fish from the water for a photo, I remember saying something like “Damn…he looks a little haggard.”