In this part of the world (Idaho), there’s an unmercifully short window of time when everything lines up just right.  The river temps have cooled down, flows have stabilized or fluctuate evenly, the weather’s unbelievably comfortable, and best of all, fish are in the rivers. It’s called OCTOBER.  For me, it follows a summer of working 80-hour guiding weeks and scattered bull trout missions.  It feels like a well-deserved reward by the time it’s here, and it makes me a little giddy…specifically the thought and reality of steelhead eating traditional wet and surface flies in the low-light of the mornings and evenings (or whenever it happens).  It’s a few weeks of a strange routine:

1. Up as dark and early as you feel you need to be to get your favored run

2. Fish hard as hell until the sun’s on the water

3. Keep fishing until you can’t deal with the yawning

4. Head back to the campsite for a truck-bed nap

5. Wake up, set up a vise on the tailgate, and tie something tasty on an Alec Jackson hook

6. And head back out for a couple runs before dark.  Repeat as needed. 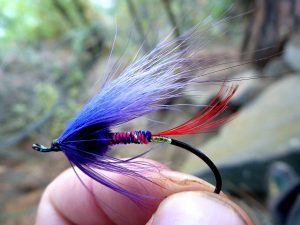 I don’t know its name yet, but since it’s caught its fair share of fish this fall, it needs one.

Now, the nights have lengthened and cooled just a little too much for the river temps to keep fish as active as they were. By late November in Idaho, we might as well keep our skis exercised, tie flies and read some Haig-Brown, and think about what coastal rivers we’d like to hit this winter.  Unless trout are still eating swung flies in the town river…but more on that later. 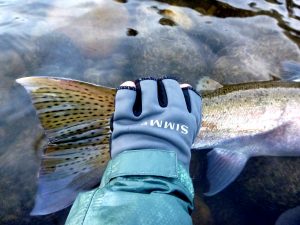 A big, native tail from one of my favorite lower-river runs on the Clearwater.

Every summer-run steelhead flyfisher has at least heard about the deal with the Clearwater.  Huge river, plenty of anglers, roaring major highway alongside its entire length…and fish up to 20 pounds that will eat dry flies.  I know…it’s crazy.  Doesn’t seem like a place that ought to exist anymore, but there it is.  It’s a place for your 7- and 8-weight Beulah Platinum and Onyx 13-14 footers.  It’s a place without a reason for anything less than 12lb tippet.  It’s also the place where I caught my first steelhead on the swing, on a two-hander Poppy lent me from the Red Shed.  I brought it back to him well after dark.

So for several years I’ve been spending at least a few weeks per fall trying to figure out what it holds for me.  And I’ll be honest – at times, the Clearwater and I haven’t really been on speaking terms, even when I was still there and persisting in the face of complete desperation.  Slowly, though, I’ve been having more success. 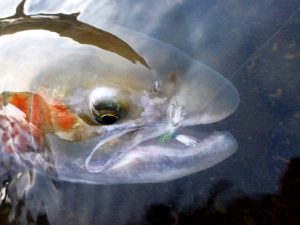 Great start to the season – a native Clearwater buck on a skated foam-back Wulff.

This time around, it came on my first morning, altogether unexpectedly.  In the gray light, a 12-pound wild buck ate my skater so subtly I didn’t even see its rise.  It set the tone for the first couple weeks of the month:  getting grabbed at least one or two times per day, sometimes on surface flies, and sometimes on intermediate sink-tips. 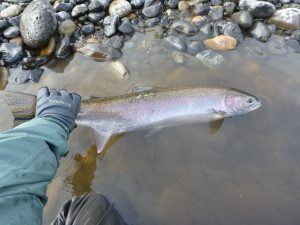 My dad came to visit – he’s been trying to land a steelhead for three years of trips north by west.  When the weekend-warrior crowds began to assail the Clearwater, we split for a much more out-of-the-way place a few hours away and at the opposite end of the high-desert steelhead river spectrum.  That is, it’s got about 120 cubic feet of water per second flowing through it, and (generally) a bit smaller fish.  We made a good call.  Our first day there I hiked up on Dad at a greasy, bouldery run, just as he was playing in his first steelhead; a cute little wild male.  I was pleased to see that he hadn’t succumbed to the temptation to nymph, and had swung an Orange Heron through that spot for his first fish instead.  I talked to him on the phone recently, and he told me he’s been having constant steelhead dreams.  It began, he said, on the plane back to Maine:  he startled himself awake between two irritated travelers when he thought a Clearwater fish was pulling his grab loop and about to make noise on the reel. 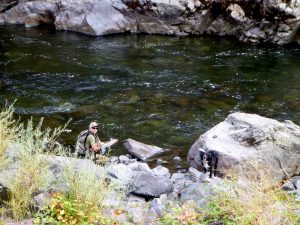 Old Man Martin with his first steelhead, which came, as he put it, “on the F@%#ing SWING!!” Rainy the border collie looks on from the poison ivy jungle.

After living and breathing a 13- foot rod and an enormous river, it was a great breath of different air to be catching fish on a 9’9 Platinum 7-weight and dry flies.  The old-fashioned way still works just fine.

A few days and some hot little high-desert fish later, though, the weather was about to take a temporary turn for the worse – or, indeed, better by steelhead standards.  Rain clouds settled in very slowly as we drove back to the Clearwater, and I got hopeful.  We met up with some other central Idaho low-life spey casting types, and in 24 hours, the pack of us hooked into as many fish as we all had in the entire two weeks prior.  I got the shine off a brand new (and delightful) 13’7 Onyx 7-weight, and we came to know the joy of hooking multiple 15-pound fish in the same run.  Maybe it’s partly superstition, and I know from experience that it doesn’t produce every single time, but a falling barometer sure makes me feel a hell of a lot more confident. 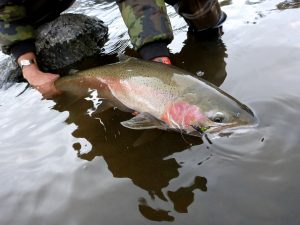 A boy that fought like a girl: into the backing, then into the air…over and over.

Even as I write this, the window’s already firmly closed.  Snow’s hammering most of Idaho, and water temps have taken a dive from the upper 40’s (still pretty confidently swingy) to the 30’s (not impossible, but not at all inspiring).  This is happening a little earlier this year than last, but that’s the way it goes.  All I can do is try to pack as much into the prime time as I’m able.  I never feel quite ready for either the beginning or the end of the October anyway.  But until a weather pattern changes, I’m going to be satisfied with a few swung-up local rainbows interspersed between powder days (with any luck).  The ocean, as well, is only a solid day’s drive away…