The Futaleufu River is not known as a two-handed paradise, but it is paradise for fin chasers no less. Certainly the wind is famous, yes is the long hard road there, but between the late dinners among world-class anglers preceded by the last hours casting a world-class fish in the shadow of Patagonian mountains, there is something very personal, very special, and yet surreal about the entire experience. I’ve wanted to fish in Patagonia since I was 13 imagining how big those Chilean rapids are and how clear the Argentina side of the Futa is. Both exceeded my expectations in sheer volume, power, and beauty. I know we were the first to fish several runs in Chile hidden between Class Five rapids. Normally people cast with helmets on when teaching someone else- but we kept in on for the white water and rocks. In Argentina side where these pictures are taken, the river is big, smooth, painfully clear washing over volcanic rocks and settlement, and windy like standing behind a Boeing 757 on roll-up. 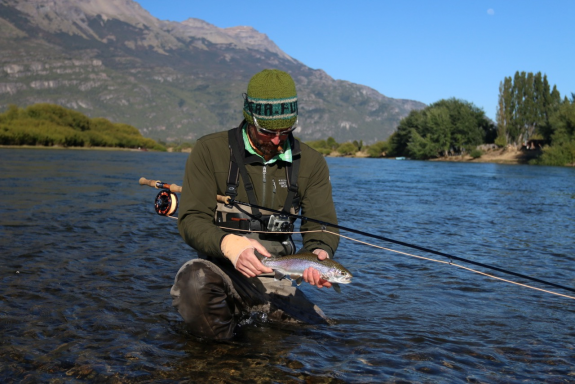 I didn’t take a knife to a gunfight, I took the new Beulah 5 weight Onyx spey and had a hard time believing I was pouring more fuel on the spey revolution in Argentina, but this rod certainly did. Everyone wanted to “try” it and then didn’t understand my Spanglish when I wanted it back. It shot bullets in the wind, mended with precision, and had the famous Beulah bend, lush and full bodied as my evening’s Melbec, once connected to these fish.